Locus-Walker (sometimes referred to as the Locus-Walker)[1] is a void ethereal who taught Alleria Windrunner everything she knows about the Void. "Locus-Walker" is apparently not his real name, but it is all he has been called for now.

Because he was free of the Void's grasp despite wielding its powers, the Burning Legion tried to capture him and in the process lost countless lives. Lothraxion was nearly one of them. Locus-Walker had seen a unique destiny for Lothraxion and so did not kill him in the Twisting Nether where he would have been dead for good.

Alleria Windrunner first heard about Locus-Walker from Lothraxion, and wanted to seek him out to learn how the Void fought for future reference while battling it. Xe'ra made it clear she did not approve of Alleria attempting to seek him out because, according to her, the Light and Void could not coexist. A thousand years after she joined the Army of the Light (from her perspective, due to how time works inside the Nether), Alleria encountered Locus-Walker while both of them were imprisoned by the Legion on Niskara. She had left the Army five hundred years before this after using the Void to save herself and her husband Turalyon from dying on Argus.

When Locus-Walker was captured by the Legion, the wrappings containing his energy body had been destroyed. After Alleria used his teachings to kill the inquisitor torturing them, Locus-Walker opened a Void rift for them to escape. On the other side was utter nothingness, the Void itself. Their first lesson was about maintaining Alleria's sanity while using the Void's power. Throughout her training Locus-Walker delved into her memories. He explained to her the duality of Light and Shadow, how the Light cannot see the whole of destiny because it alone is not responsible for it; likewise, the shadow cannot see all of destiny either. He explained how the shadow sees the Light as nothing but horrors, just as the Light sees the shadow, and how neither is true nor wrong. How the Light seeks one path and shuns all others as lies, while the Void seeks every possible path and sees them all as truth. Through Locus-Walker's training, Alleria was able to see destiny that both the Light and Shadow could not see.

But Alleria also realized she was delving into the Void too soon, before her destiny demanded it. Seeing a vision of Turalyon presently being attacked by an eredar attempting to steal his soul as a prize, she tried to have Locus-Walker let her go. When he refused as they were not done, she attacked him to force the lesson to be cut short. Furious, Locus-Walker declared her a coward and he should have expected no less. Though he began to gather power to strike back at her, he stopped when he heard what Alleria's vision was and, laughing, said she had made a very determined enemy; Alleria wasn't sure if that meant Locus-Walker or the eredar. Deciding she may have a unique destiny Locus-Walker acquiesced, allowing Alleria to go save her husband. But he believed they would meet again.[1]

Alleria assumed Locus-Walker was the only one of his kind to tangle with the Void.[2]

While investigating why the Void was corrupting the Krokul of Mac'Aree on Argus, Alleria and an adventurer from Azeroth encountered Locus-Walker. He explained that he had come to Argus to investigate what the Shadowguard, a group of ethereals who had tragically succumbed to the Void,[3] were doing there.[4] The Shadowguard, in turn, wanted to capture Locus-Walker before he could disrupt their efforts of making Argus fall to darkness. After showing Alleria and the adventurer what the Shadowguard was up to, Locus-Walker confronted Alleria about her husband Turalyon and what he thought of her use of shadow magic, asking how she could use it when the Light shone so brightly beside her. Alleria countered that without the Light, there is no Shadow.[2] Locus-Walker had hoped to find more ethereals among the Shadowguard who possessed the necessary strength of mind to resist the Void, and was disappointed to find such an utter lack of resistance.[3] 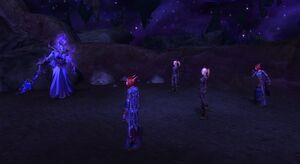 Locus-Walker and various elven scholars and wayfarers in Telogrus Rift

After taking care of the ethereals at the Shadowguard Incursion, Locus-Walker decided to allow Alleria another opportunity to pursue her destiny. After slaying the void revenant Nhal'athoth, Locus-Walker retrieved its heart and gave it to Alleria, who consumed it.[5] After telling Alleria that as long as her mind remained her own she could control the Void's power and that perhaps someday he would tell Alleria how he came to control it by himself, Locus-Walker took his leave.[6]

Locus-Walker appeared again when the Army of the Light sought the Crest of Knowledge from the Seat of the Triumvirate. After Saprish died, Locus-Walker took his staff. During the battle with L'ura he prompted Alleria to use the power of the Void rifts the dark naaru was opening, culminating in her absorbing L'ura's essence and transforming into a Void state that she could turn off and on at will. After saying they needed to test the limits of her newfound power, Alleria and Locus-Walker left the Seat.

Locus-Walker can later be found at Telogrus Rift after the void elves join the Alliance. He finds the void elves fascinating and they give him much to ponder. He wants to linger to learn about Telogrus. High Elf Wayfarers and Silvermoon Scholars are gathered around him.

Seat of the Triumvirate

I sensed that change was destined to find Alleria Windrunner, but I did not anticipate that her kin would undergo a similar transformation.

The implications are many. These events have given me much to ponder.

What do you know of Telogrus?

This is a very old place. Broken by rage, yet sculpted by the threads of fate.

There is much to be learned here. I believe I might linger a while.