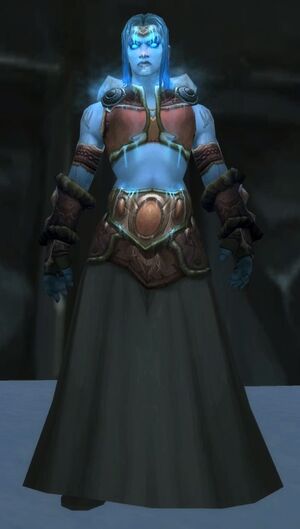 Lok'lira the Crone is a level 79 vrykul quest giver initially found inside Forlorn Mine at 43,69 next to Sifreldar Village in the Storm Peaks. When first encountered, she tells the player that she is a Yrkvinn, an illusionist, who has been imprisoned by the Hyldnir and asks the player to help her escape via a series of quests.

After her release, she disguises herself and waits at Brunnhildar Village where she continues to give several more quests. This leads the player to eventually lure Thorim away from his sanctuary at the Temple of Storms into a battle with his brother Loken (

[80] The Reckoning). At the end of the fight, Loken reveals to the player that he had been Lok'lira all along.

These mines are a dreadful place. Fortunately, I don't plan on being here long.

Look at them... all they care about is outdoing each other.

Brunnhildar Village
Here she'll disguise herself to look like a frost vrykul.