For information on how to defeat Loken in the Halls of Lightning, see Loken (tactics).

“My death... heralds the end of this world.”

Loken was one of the nine titan keepers tasked by the Pantheon to watch over Azeroth in their absence. Elevated to the role of Prime Designate, Loken was the chief jailor of the Old God Yogg-Saron, imprisoned in the depths of Ulduar. However, the whispers of the Death God eventually drove Loken to betray his comrades and bring down the work of the titans. With Ulduar and the Forge of Wills under his control, Loken created an army of iron to do battle throughout Northrend. He was eventually stopped and killed by brave adventurers.

Loken was one of the Keepers created by the Pantheon to lead the titan-forged armies against the Old Gods. He was given power by Norgannon. He and Mimiron battled and defeated Neptulon the Tidehunter.[2] 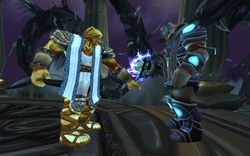 Thorim and Loken during The Reckoning.

Loken had an affair with Sif, the wife of his brother Thorim. Yogg-Saron, from his prison within Ulduar, muddled Loken's thoughts and made him lash out at Sif, scared at the thought of losing her, and he killed her by accident. Horrified at what he had done but too scared to tell Thorim the truth, Loken tricked Thorim into believing that it had been the work of Arngrim, the king of the frost giants, turning Thorim against his allies. Loken would stop the war between Thorim's and Arngrim's forces with an army he had created with the Forge of Wills, but unknown to Loken Yogg-Saron had planted the curse of flesh inside the forge, which would slowly convert titan-forged into flesh and could also spread to those forged before the curse was created.[3]

After Thorim retreated to the Temple of Storms in despair, Loken was desperate to cover his actions, even if it meant using Yogg-Saron's power to do so, for if Algalon or the Pantheon ever found out his life would be forfeit. He arranged the death of Mimiron, making it look like a lab accident, though Mimiron's mechagnome followers would create a new mechagnome body to house the Keeper's soul. Loken subdued Hodir and Freya, corrupting them into complacency with Yogg-Saron. He convinced the titan-forged Helya to imprison Odyn, the Prime Designate, within his Halls of Valor, claiming the title of Prime Designate that Odyn had abandoned in the process. Loken expected Ra to come up from the south and investigate what was going on, but Ra never arrived. This is because he had discovered that the Pantheon was dead, killed by Sargeras, and had locked himself up in the Mogu'shan Vaults in despair. Afterward, Loken exiled all titan-forged from Ulduar and retreated into the depths of the complex.[3]

The final two Keepers were Tyr and Archaedas, who had seen what Loken did to the others and left before he could reach them, alongside their friend the giantess Ironaya and the earthen, mechagnomes, and vrykul of the Storm Peaks. Tyr and his allies stole the Discs of Norgannon, which record all history in the world,[3] to investigate the extent of Loken's betrayal. Discovering the theft, Loken sent horrific monsters called C'Thraxxi after Tyr's group, but Tyr sacrificed his life to fight the creatures while his comrades escaped with the discs.[4]

Terrified of what would happen if Tyr, Archaedas, and Ironaya showed the Discs to Algalon and revealed his treachery, Loken created the Tribunal of Ages and filled it with false information to cover his tracks. Almost all of the information contained within the Tribunal is false. Loken also altered the signal sent to Algalon so that no living being could contact him and he would only arrive upon Loken's death.[3]

For thousands of years the imprisoned Yogg-Saron was unable to do more than keeping the Keepers, Loken included, quiet and complacent inside Ulduar. His grasp on them was tenuous, and convincing them to directly help the Old God had proven fruitless in the past. It was not until Cho'gall of the Old God-worshiping Twilight's Hammer clan infiltrated Ulduar and weakened Yogg-Saron's chains that the entity's influence on the Keepers increased, becoming strong as iron. Yogg-Saron commanded Loken to create a new army from the Forge of Wills. In Loken's hands, the forge churned out legions of iron dwarves and vrykul who sought only bloodshed and war.[5]

Thorim — having realized he'd been had — gathered his weapons and armor (with the aid of players) and confronted Loken in combat. However, being so far from his sanctuary in the Temple of Storms allowed Loken, in proximity to his dark master, to overpower his brother.

Loken utilized the services of Ignis the Furnace Master on at least two occasions. One was the transformation of Veranus, Thorim's proto-drake, into the plated monstrosity Razorscale. Loken also ordered the construction of Kologarn, the massive stone construct, to guard the Shattered Walkway that leads into the inner halls of Ulduar. 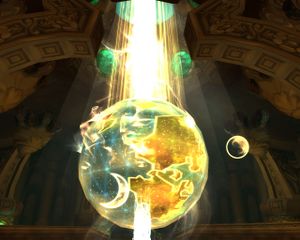 When he is killed in the Halls of Lightning, Loken says that his death "heralds the end of this world", after which the map of Azeroth bursts into fire and launches a beacon of light toward the sky. According to the Archivum Console in Ulduar, the "Algalon failsafe" - an automatic emergency signal following the death of the prime designate - was activated immediately following Loken's demise, resulting in the arrival of Algalon the Observer. The console goes on to explain:

When asked to explain "re-origination", the Console replies:

"The decomposition of the planet and its living organisms into base elements: metals, rocks, gases. This is followed by a period of reconstitution of each element into the original planetary blueprint."

In other words, the Titans would destroy all of Azeroth and everything on it, then rebuild it from the raw materials left behind from that destruction - thus giving credence to the dire warning in Loken's dying breath.

The Tribunal of Ages is a false system created by Loken to cover up the crimes he had committed and is not based in historical fact.[3]

According to the Tribunal of Ages, Loken — also known by various sources as "Keeper Loken", "Sentinel Loken", and "prime designate" — was named the supreme protector of Azeroth by the Pantheon, leading the aesir (storm giants) and vanir (earth giants) following the containment of the Old Gods. Along with his brother Thorim, the Stormlord, as well as Watchers Hodir, Freya, Mimir and Tyr, Loken was designated as a guardian to watch over the prison of Yogg-Saron, deep within Ulduar. Over time, however, Loken succumbed to the whispers of the Old God and turned on his allies, taking control of Ulduar and seeking to unravel the plans of his former masters.[6] At some point he provoked a global war to break out between the storm giants and earth giants, which was ended by Loken "neutralizing" them. After the conclusion of that war, Loken placed the earthen, giants, and vrykul into stasis at designated holding facilities (presumably, facilities like Uldaman or Ulduar).

Loken is also involved in the following quests:

Come, minions! Your master calls!
The work of your brothers in the Storm Peaks has reached a frenzied pace. Soon, Father will be freed.
Your brothers to the north have subjugated the stone behemoths and set them on the path to Ulduar. Soon, the remaining defenses of the Pantheon will be neutralized.
The three fissures opened by the mortals of this region must be silenced. The earth hears and sees what we do and will continue to interfere with our efforts if the way is not closed.
Bury this place, your master demands it!

You're late, overseer.
Destiny will not wait. Your craftsmen must increase their production of the war golems before the stone giant leader and his army reach Ulduar.
Tell your rune-smiths to continue converting what stone giants you can. Those that will not submit must be destroyed.
If the stone giants interfere with our work at Ulduar, I will hold you and your thane responsible. Mortals must not be allowed to come to the aid of the giants.
Return to your duties, overseer. Be certain to impress upon your workers the urgency of their tasks.

Encounter in Halls of Lightning

Loken's name is likely based on Loki, the main trickster of Norse mythology. With Angrboda, he was the father of Fenrir, Jormungandr, and Hel. Although Loki is actually a jotun, he is a blood brother of Odin, and Odin, Thor and Loki feature in many stories in Norse myth. However, Loki turns on the Aesir when he tricks blind Hodr into killing Balder (or Baldur), setting off the events that would lead to Ragnarök. At Ragnarök, Loki would lead the jotuns and inglorious dead into battle against the Aesir and the Einherjar (glorious dead), and there he would do battle with Heimdall, the watchmen of the gods, and both would slay each other. Interestingly, it's Loken's death that causes events in WoW to spiral out of control leading to the possible destruction of Azeroth.

Loken was also referred to as Kronus in the beta,[9] which is a reference to Cronus, the first Titan of Greek mythology and father of several deities of the Greek pantheon. This may be an alternate name or a leftover from the Alpha, before his name was finalized.