Lokholar the Ice Lord (sometimes spelled Lok'holar)[1][2] is a massive ice elemental spirit summoned by the Horde in the Alterac Valley battleground. 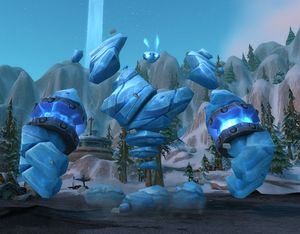 Lokholar in World of Warcraft

Lokholar, once successfully summoned, will patrol around the Field of Strife for ten minutes before pushing into the Stormpike base. If Lokholar successfully reaches the Stormpike base, he will stand in front of the Dun Baldar keep and stay there unless provoked by enemy players, in which case he will give chase until he either leashes back, kills the enemy player, or is killed himself.

Lokholar starts out relatively weaker than his counterpart Ivus the Forest Lord, but he can grow significantly stronger over time if supported by the Horde offensive. Lokholar will gain strength each time an Alliance player in the vicinity is killed, and this is shown by the yell: "Lokholar drinks in your suffering! Let your essence congeal with Lokholar!" However, Lokholar, while powerful, is not invincible. Without Horde assistance, he can be killed by the enemy Alliance forces with relative ease. Lokholar can be kited, but due to his frost-based attacks is not easy to do, as he can often snare or root the kiter and kill it before returning to his original position or advance movement.

Lokholar is notorious for his small attackable melee body, with melee players often having to be right dead-center of his body in order to successfully attack him. If he's moving around a lot, this can make bringing him down difficult.