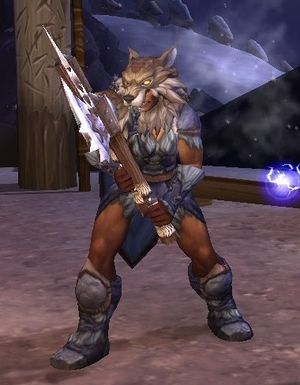 Lokra is a young orcish shaman of the Frostwolf clan found at Stonefang Outpost in Frostfire Ridge. She is the younger sister of Durotan's mate, Draka.[1][2] Lokra is fiercely loyal to her allies and will go to any lengths to keep them safe.[3]

After her mate Karg is taken captive by the Iron Horde in Frostfire Ridge, she liberates him with help from the adventurers of the Horde. Along the way however, her wolf companion Asha is killed. The group goes on a rampage through Grom'gar to weaken its defenses and avenge their fallen comrades.

She is seen fighting alongside Karg at The Battle of Thunder Pass, and the commander has the option to recruit her as one of three potential followers after the battle.