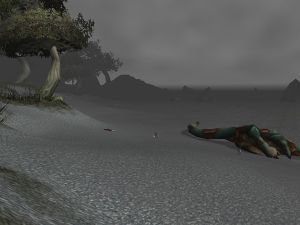 The Long Wash is ironically enough the shortest stretch of coast in Darkshore. It is the desolate stretch of sand that runs south from the Ruins of Auberdine in Darkshore until due west of Ameth'Aran. The shore is gloomy and dark under the perpetual overcast skies of Darkshore, and the beach is littered with debris and the carcasses of dead sea animals. Murlocs have recently been showing up with greater frequency along the coastline.

During the War of the Thorns, the area became a small battlefield between the night elves and the invading Horde, hunting for food.

"Wash" is an obsolete word meaning "the portion of the shore washed by the waves".[1]