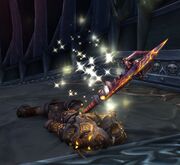 Glitter effect indicating that there is loot.

In World of Warcraft, loot can mean a couple of things:

When soloing, looting is easy — a "lootable" corpse emits a "glittering" effect, and the cursor will change to the "trade" cursor when you mouse over the corpse. Simply right-click (or Command-click on a Mac with 1-button mouse) on the corpse of the mob you just killed, and a window will pop up containing any loot the mob was carrying. (If the loot window is empty, this normally indicates a bug, as corpses that have no loot on them simply cannot be right-clicked.) Using Shift-right/Command-click "autoloots" the corpse, which picks up all items except "Bind on Pickup" items. For Bind on Pickup items, you will be prompted to accept the item, binding it to you, or turn it down, leaving it in the corpse. You can return and loot the corpse of any remaining items until it disappears.

Looting while in a party

Introduced in Mists of Pandaria, Personal loot is the default for all group content. Under personal loot, the game chooses a number of players (based on group size) and awards them a random item for their spec, while everyone else receives an amount of gold specific to them. Mounts can also be won via this method from bosses that drop them. Like solo looting, the drops are retrieved by directly looting the corpse of the boss, with the chat logs showing who's won something. Loot from Personal Loot is tradeable to anyone in the group, as long as it is also not an ilvl upgrade for yourself.

The Bonus Roll system, also introduced in Mists of Pandaria, uses this loot type as well. Players in possession of a specific token, such as the

[Seal of Broken Fate], will be given a chance to spend the token for another try at loot from a recently defeated boss. This can be done on any difficulty as well as on world bosses. The chance of obtaining loot from a boss drop is currently theorized to be approximately 15% (equivalent to an average of 3.75 items from a 25-player kill), but this has not been confirmed.

Finally, Legion legendary and artifact quest items are treated as what's called 'personal push loot', meaning these items do not need to be directly looted from the boss' corpse and are instead directly placed in the player's inventory.

This loot method is preferred by developers and, with Battle for Azeroth, has replaced the other methods.

Introduced in the Battle for Azeroth pre-patch, Legacy Loot Mode is automatically enabled when a player enters an instance at 11 levels or more above the maximum level of the content. Under Legacy Loot rules, drops will include a chance for all items that would drop for a full party or raid at the instance’s level.

Quest loot is on a separate loot distribution and there are two common modes for this to occur.

In battlegrounds, players can loot enemy corpses. This will remove their insignia so that they must revive at the graveyard, and give the looter a small sum of money. Note that if the player's ghost is running toward the corpse when its insignia is removed, he'll have to run all the way back to the graveyard to resurrect, so it may be wise to wait a moment before looting. Looting the player's corpse will also force its spirit to release, if they have not already done so, thus preventing their ghost from spying on the area around their corpse.

There is a common misconception among game mechanics analysts that the Gambler's Fallacy applies to the case of getting a specific loot item to drop at least once from a mob by repeatedly farming said mob. This is not exactly true. It is correct that every single time you kill said mob, the chance of the desired loot dropping is constant. However, the probability of getting the desired loot to drop at least once in a collective set of multiple kills is not constant. Rather, it is a normal probability density function centered on the expected number of kills for the loot to drop at least once.[1]

In some situations, however, developers have implemented what's known as 'bad-luck protection' which does actually increase the chances of a certain item dropping. However, the uses of this system are sporadic and specific, tied to things such as Hidden Artifact Appearances.

In all loot settings, money on the corpse is distributed as evenly as possible among all the party members.

The group leader may set an item quality threshold. Items below this threshold are handled in a round-robin way preventing people from wasting time rolling for vendor trash. By default, uncommon and better items are rolled for. In raids, it's common to raise the threshold to rare or epic, since uncommon items are insignificant to players equipped enough to raid.

Items of Uncommon (green) quality or higher might not be immediately lootable, depending on the loot rolling threshold established by the party leader. When an item is available that falls within that rolling threshold, the looter is prohibited from taking the item and a 'roll window' pops up for all party members with an image of the item and three or four buttons — a pair-of-dice button, a coin button, and a red circle with diagonal line button, and possibly a button showing a disintegrating sword.

The high-roller among those who roll is awarded the item, and it goes in that character's backpack. If their backpack is full, that person, and only that person, may loot it by clicking on the monster's corpse after first clearing up space.

If everyone passes on a rollable item, the item becomes freely lootable to anyone in the party.

The roll window has a timer shown as a shrinking bar; if the timer expires before you choose "need" or "greed", you will "pass" on the item. This is generally the recommended action for Bind on pickup items that you cannot equip.

For very valuable Bind on Equip items - which nearly any player can be expected to sell on the Auction House - it is sometimes customary for everyone to click Greed unless someone really needs it for equipping. Need should not be used unless the player really needs it. In Dungeon Finder groups, a BoE item will generally become Soulbound if the player rolls Need, so this is generally a safe policy for BoE items.

On the other hand, if one person rolls Need when everybody else has rolled Greed, the Needy player will automatically win. This is commonly referred to as "ninja looting", though Blizzard does not see it as such and generally will not intervene. To prevent arguments, you may wish to discuss a looting policy beforehand if you know that the instance has a chance to drop a rare item, whether BoE gear or a vanity item such as the

[Fiery Warhorse's Reins]. If a player agrees to such a policy, then violates it, you may be able to find a sympathetic GM who will restore the item.

Since patch 5.0.4, when a player wins a loot roll, a new pop up window (similar to achievements) appears letting the player know they won the roll and also displays their winning roll number.

Group policies and other loot options

Note that loot from containers — chests, food crates, and the like — as opposed to corpses, also uses the party loot threshold (if one is in effect), although the container will always be lootable by any party member. If the container holds a high-quality item, that item will be rolled on (or not), the same as if it were looted from a corpse.

In the event of two or more rolls being equal (for example: if 2 players have a 'greed' roll with the number 56 for a certain item), the system performs a hidden secondary roll to determine which player will receive the item.

Groups and guilds that party regularly go beyond the built-in loot distribution mechanisms that Blizzard provides. There are numerous loot systems that can be used to distribute loot, with their own set of trade-offs.

"Reverted the change" was in reference to an undocumented change from a few days prior.