Loramus Thalipedes is a level 57 night elf demon hunter and quest giver. His quests during the Blasted Lands storyline revolve around putting an end to the dreadlord Razelikh the Defiler.

Loramus Thalipedes was a level 60 quest giver found on an island southeast of Hetaera's Clutch in the contested territory of Azshara. [60.8, 66.4]

Prior to Cataclysm he was the only demon hunter NPC found outside of Outland. He had three elite felhounds guarding him: Raytaf, Shahiar, and Zaman. He sent the player on quests to prepare them to combat Razelikh in the original You Are Rakh'likh, Demon quest chain. 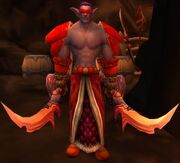 Loramus set out for the Blasted Lands, passing through Dreadmaul Hold,[4] to hunt down the demon Razelikh, but was killed by one of the demon's lieutenants, the ogre Grol the Destroyer.[5][6] With the aid of the player, Loramus is revived by the demonic energies from the Altar of Storms. He then remains in the Blasted Lands, appearing near Kasim Sharim in the case of Alliance players or near Bloodmage Lynnore for Horde players. After a series of quests, he appears, greatly buffed, at the location where Razelikh is finally fought as part of the quest

[57] You Are Rakh'likh, Demon. He fights alongside and directs the player, then sacrifices his own (second) life in order to help trap Razelikh's soul, claiming he will battle Razelikh in the next world.

[Stone Knife of Sealing] that Loramus and Razelikh were trapped in was eventually destroyed, and their souls escaped only to be sent to the Twisting Nether. Within the Nether Razelikh's body reformed, with Loramus trapped inside and their souls entwined in eternal conflict. The next thing Loramus knew, they were expelled from the Nether and summoned to Azeroth by the Burning Legion.[3]

Loramus, now in control of Razelikh's body, arrived in Azsuna and began hunting demons at the Felblaze Ingress. Demon hunters of the Illidari sought him out and returned with him to the Fel Hammer.[7] Loramus had extensive knowledge of the nathrezim, but Razelikh was able to periodically take control of his body. Because of this, the Illidari locked him within a magical prison where they could make use of his knowledge without risking Razelikh's escape.[3] He provides class hall upgrades for demon hunters. 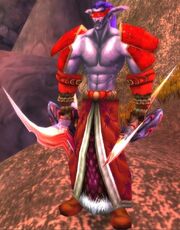 I need you to do what I say, <race>. If we falter, then we may be playing right into Rakh'likh's hands.

[56] Not Just Any Body his body is found in three parts or one bag:

The removal of his eyes was not done by the ogres but done with the help of Loramus' master.[8]