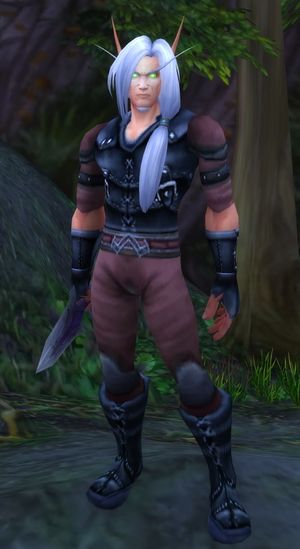 Lorash Sunbeam[1] was a Horde operative who oversaw the assault on Astranaar in Ashenvale during the War of the Thorns. He and a Horde champion assassinated the guards of the town.[2]

Lorash claimed to have been born in the Tirisfal Glades during the exile of the Highborne. During the winter in which the Highborne were trapped in the mountains, Lorash's father went out hunting despite the cold, losing two fingers to frostbite and eventually not returning at all. Lorash lived through centuries of warfare with the Amani trolls, during which he saw pieces of his childhood friends decorating Amani villages. Years later, during the Scourge invasion of Quel'Thalas, his mother was killed and raised into undeath. All the while, he grew to resent the night elves for having exiled his kin and not coming to his people's aid.[3]

Shortly before the War of the Thorns, High Overlord Saurfang briefed Lorash and a Forsaken named Rifen on the plan of attacking night elven outposts and patrols in Ashenvale. Lorash wasn't bothered by the idea of starting a war with the Alliance and was more concerned about what would be in it for him, with Saurfang assuring him that the rogues would be duly rewarded.[3]

Lorash and Rifen proceeded to attack a group of Sentinels near Silverwind Refuge led by Commander Anaris Windwood. When Ferryn and Delaryn Summermoon arrived and told Anaris of rogue attacks throughout Ashenvale, Rifen seized the opportunity and dropped on Anaris from a treetop, killing her. The blood elf and Forsaken managed to kill six Sentinels before they were forced to retreat. While Lorash escaped, his partner was mortally wounded and captured.[3][4] 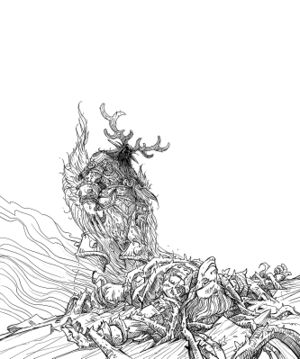 Lorash's death at the hands of Malfurion.

Some time later, Lorash encountered the goblin hunter Chikkers, and they agreed to work together to dispatch the night elves. While perched on a tree branch, Lorash ambushed a group of night elf druids moving through the treetops, using poisoned shurikens to kill two of them before running across the branches in the opposite direction, leading the druids away from the battle lines until he landed on a branch that was only capable of holding a single creature's weight. When four of the druids leaped to his branch, he stepped off and landed on the ground far below. Lorash, Chikkers, and the goblin's pet Captain were easily able to dispatch the druids that fell to the ground when the branch snapped under their weight. Moments later, the trio was forced to hide when Malfurion Stormrage himself arrived to pay his respects to the fallen druids. Lorash considered attacking the archdruid, but Chikkers convinced him not to. After Stormrage left, Chikkers told Lorash that he would not risk helping him ambush Malfurion but agreed to back him up until then.[3]

Lorash was determined to try and ambush Malfurion, despite Chikkers trying to talk him out of it. Eventually, Lorash was left on his own and attempted to ambush Malfurion, dropping on him from above with daggers drawn to separate his head from his neck. At the last moment, however, Malfurion stepped aside and immobilized Lorash in entangling roots, pinning him to the ground. The archdruid told the blood elf that the sin'dorei had no reason to aid in the invasion of Ashenvale, for the night elves and blood elves had once been kin and had fought together as recently as on the Broken Isles. Lorash told Malfurion of his family's history until Sylvanas Windrunner herself suddenly arrived at the scene, distracting Malfurion. Lorash saw his opportunity and attempted to kill Stormrage by throwing his last two shurikens. However, Malfurion noticed his attempt and immediately caused the root around Lorash's neck to squeeze, crushing his throat. In his last moments, Lorash wondered if he would see his family on the other side.[3]

Some time after the War of the Thorns, Lorash was resurrected by the Val'kyr as a Forsaken. According to him, he accepted the gift of undeath quickly after being offered, and hopes he gets another chance to fight Malfurion, to return the favor of being decapitated. He is found in Bashal'Aran in Darkshore during the Battle for Darkshore.

The val'kyr hardly had to even offer before I was back on my feet. What else did you expect?

<Lorash considers for a moment.>

I do hope I'll get another chance to cut off Malfurion's head. See how HE likes it.