For information about the modern NPC, see Spirit of Lord Alexei Barov. 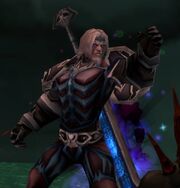 Lord Alexei Barov was the lord of Caer Darrow, Brill, Tarren Mill and Southshore. He was the father of Alexi, Weldon, and Jandice Barov and husband of Lady Illucia Barov. Like Jandice and Illucia, he is now an agent of the Scourge found in Scholomance.

Alexei Barov is one of the six bosses that must be defeated to summon Darkmaster Gandling. He also guards

[The Deed to Caer Darrow].

Alexei Barov is no longer a boss. However, he appears in the form of the Talking Skull, who asks adventurers to kill Darkmaster Gandling and cleanse the darkness that has taken hold of Scholomance. He reveals his true form upon Gandling's demise.[2]

He has a damaging shadow AoE (Unholy Aura, deals 150 Shadow Damage per second to any nearby enemy) similar to the one Baron Rivendare has.

[Shadow Protection] are extremely helpful, if not imperative, to fight him. He also casts Immolate and Veil of Shadow, a curse that reduces healing effects on the target. It should be removed immediately if its on the tank.

During the fight itself he has 2 guardian mobs with him. Don't even try pulling them separately, as the three are linked.

It is common when a party reaches these rooms for Alexei to be the first of the six bosses killed to summon Darkmaster Gandling. This fight is more difficult than that of any of the other bosses, or that of Gandling himself. Any party that can defeat Alexei is virtually guaranteed to be able to finish the instance.

Because of Barov's Unholy Aura, it's important no matter what strategy used that he is tanked in a place where the Unholy Aura won't be damaging non-melee classes. One of the best places is at the bottom of the stairs in Gandling's Study; casters and hunters can do damage to Barov and heal melee classes from near the door between the crypt and the study or the corners of the study. But tanking Barov in a corner of the crypt or even down where he originally stands will do.

Have the priest stand on the right set of stairs while the hunter places a Freeze Trap right where the priest stands. The priest can then shackle the LEFT mob. The undead guards are around the same speed as the boss so it is likely that the mob will get to the trap before Barov. The priest must then run a few steps back while the tank sunders Barov and everyone else does as much DPS on him as possible. If the mob will cool before Alex dies, have an offtank take a few hits while the rest of the group keeps attacking Barov. The priest will need to keep an eye on the shackled guard in case a reshackle is needed (which, for most groups, will be likely).

Alternate for priest and hunter

Have the hunter and the tank stand on one of the stairs down to Barov, and the rest of the party at the other. Have the hunter start the encounter by firing on Barov; immediately after, have the priest shackle one guard and the tank rush the other. The hunter must now kite Barov upstairs and around the upper ring of Gandling's Study while the party defeats the unshackled guard, then the shackled one. After both are defeated, the hunter will bring Barov back downstairs (or simply

[Feign Death]) where the tank engages Barov in the lower level of the study. After 5 sunders, melee DPS will need to move in while the hunter and casters stay out of Barov's AoE; if possible have the tank engage Barov hold at the bottom of the stairs while casters stay in Barov's original room or right at the doorway to the Study.

Start the encounter with the priest shackling a guard. The mage will then need to

[Frostbolt] Barov. (Use level 1 frostbolts to cause minimal aggro but retain the snare effect — it's far more important at this point that the tank will be able to take Barov's aggro quickly than Barov being damaged.) The mage will then need to use frostbolt,

[Frost Nova] to kite Barov around the upper ring while the rest of the party defeats the unshackled guard. Unless the mage is doing really well with his health during the kiting, you will probably want to reshackle the guard and bring Barov downstairs immediately after the unshackled guard falls.

Shackle one guard and make sure the offtank can take care of the other one while the rest of the party dpses Barov.

Hunter without a priest

Have the hunter send their pet to tank one of the adds and the main tank take the other add. At the same time the hunter hits Barov with a arcane shot and then runs with Aspect of Cheetah switched on. The hunter runs up the stairs and then kites Barov round the balcony. It is important to maintain maximum range otherwise the hunter takes damage from Barov's shadow aura. Once the adds are downed the hunter jumps back down and enters the room again the tank picking up Barov on his return. It is important that Barov is held well into the room otherwise you may risk immediately aggroing Gandling when Barov dies, if he's the last of the 6 bosses before Gandling.

If you have a frost mage with you, you can use this tactic. Have the main tank start the fight at the top of the stairs on the right side of Barov's room. You must start with a ranged attack. You will then start a blizzard on top of the stairs where the guards and Barov will be coming from. You should be standing in the entrance-way to the room. As soon as you have gained aggro on the guards, break your blizzard and move out into the main chamber. Proceed to kite the guards with your various frost spells. I find it easiest to go to the upper floor and to move around the edge of the room. If the guards are getting too close, simply jump down the lower floor, and hit them as they come around and down the stairs. This should allow enough time for the other players to take out Alexei and then you can either drag the guards back inside, or the party can move out to you. This one takes a bit of practice, but once mastered, can be highly effective. Alternatively, the mage can pull Alexei to begin with, and pull him around the upper floor. Provided judicial use of Blink and a barrier spell, and Major Health Potions, a reasonably geared mage can survive until the rest of the party have dispensed with the other two guards, and can come to the mage's aid. It is likely that you will need to be healed at some point - depending on how fast the two guards can be killed - so build aggro against Alexei with the odd instant cast. A priest's Shadow resistance buff is extremely useful to this strategy, due to the fact that Alexei's damage buff can be partially resisted.

If you have a paladin in the group you can have him cast Turn Undead on one of the adds and they very rarely leave the room. When the Turn Undead wears off the paladin will then be able to recast fairly soon and keep the add out of the battle until Alexei has been brought down. **NOTE: If there is a priest in the group the other add can be shackled to be out of the fight as well.

If you have a Retribution Paladin in the group, have instead of the tank calling out the adds, follow this strategy, first to cast repentance on the add causing it to be incapacitated for a minute so long as no one hits it, and cast Turn undead on the other add thus freeing you and the group to take out Alexei quickly. Repentance lasts only a minute the same amount of time it takes to recharge the spell, this strategy will allow the group to only fight Alexei and later get rid of the adds once they've taken care of Alexei, this strategy also works very well as a solo strategy.

If you have a druid available to kite, you can start off with the druid using a combination of starfire-moonfire on Alexei to obtain aggro. The two guards are picked off by the party, while the druid shifts to Cat form and uses Dash to kite Alexei away from the group, occasionally using Faerie Fire(Feral) if the druid has it available. Once Dash wears out, the druid can shift to bear form and continue to keep Alexei occupied, either by running or offtanking. Once the party gives the "All clear" shout, use Bash on Alexei to gain some distance and run him back to the party.(Strategy by Xenigma, Stonemaul server)

The hunter drops an ice trap at the top of one set of stairs, where the rest of the party begins. The hunter pulls Alexei, two of the remaining party members tag the guards. The hunter kites Alexei around the top of the study, or better, to Ras Frostwhisper's chamber if it has been cleared ahead of time. One of the guards will freeze, kill the other. Typically, even in low dps groups the second guard has fallen by the time Alexei reaches Ras's room, giving plenty of time to mana up, bandage, and heal before he returns. If not, the hunter can allow Alexei to approach, feign, then pop up, run back with him, and tag him again in Gandling's Study, rekiting him over and over again until the party is ready. I prefer to kite to Ras's room because of the corners in Gandling's Study. With a weak or lower leveled group, every health point will count when killing this guy because of the aura. You can avoid that almost entirely on the Ras kite. Once the guards are down and the party is ready, let him return after a feign and kill him. It's helpful to mark the farther guard with a skull and tag the closer guard first to ensure that it is the one that freezes and that the ice trap isn't broken.

Alexei Barov has a chance to drop one of the following items. 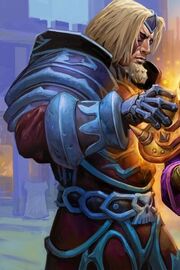 Alexei's living form appears as a legendary Paladin/Warrior card in the Scholomance Academy expansion for Hearthstone. His flavor text reads: "Alexei Barov stayed at Scholomance despite leasing it to Kel’Thuzad. He says it’s for "supervision.""