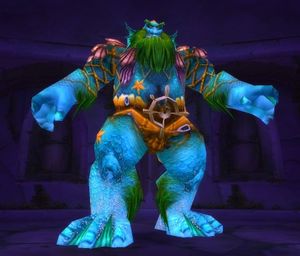 Lord Arkkoroc was a level 60 sea giant quest giver located in the Temple of Arkkoran in the contested territory of Azshara. Loramus Thalipedes described him as a lesser deity, and his sons patrolled around the temple. Many of Lord Arkkoroc's sons were slain by the hydra Hetaera, and he now seeks revenge.

Following the Cataclysm, Arkkoroc has vanished and presumably was slain. The naga are using a gem called the

[Heart of Arkkoroc] to control his sons.

Also known as Arkkoran,[1] he is the supposed god of the sea giants. The makrura and murlocs in the area consider him some kind of divinity as well.[2] Arkkoran only leaves the temple when he is in a foul mood.[2] The religion surrounding him is also called Arkkoroc.