For the Waycrest Manor encounter, see Lord and Lady Waycrest.

Lord Arthur Waycrest was the patriarch and Lord of House Waycrest. 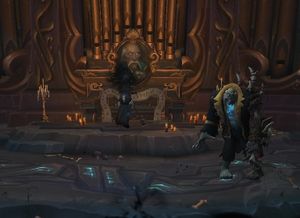 As a descendant of Arom Waycrest, Arthur would eventually take his position as Lord of House Waycrest. He would fall in love and marry a woman named Meredith and from their marriage, they conceived one daughter, Lucille Waycrest.

After Lucille grew up, she fell in love with Alexander Treadward, a merchant. Arthur was pleased that she was happy and apparently approved of the young man, and after the couple became engaged, looked forward to officiating their wedding as Lord of Drustvar. Meredith disapproved of the marriage as Alexander was a common merchant. She tried to convince her husband to call it off even on the wedding day, but he compared the young couple to their own relationship, as Lucille was following her heart, just as Arthur had.[1] Having failed to sway Arthur to her line of thinking, unbeknownst to him on the day of the wedding Meredith hired Roland the Knife of the Red Hand to assassinate Alexander.[2] With him dead on the ground, Arthur stayed with his shocked and grieving daughter to protect her.

All was fine in his land until rumours started going around that he fell to a deadly illness and that Meredith would refuse to leave his side. Stricken with grief due to her ailing husband, Lady Waycrest called out to any power that could save him. Gorak Tul answered her cry and promised that — for a price — death would never part the couple.[3] She started the Heartsbane Coven, but Arthur fell out of sight. His last whereabouts were heard from Marshal Everit Reade who told Lucille that her father had been captured.[4]

When the newly formed Order of Embers charged from Upper Corlain to Waycrest Manor. They found a mutated, undead Arthur standing next to his wife, and Meredith, telling their daughter that he was "alive and well", revealed she intended on Arthur becoming Lord of all Kul Tiras.[5]

As the Order of Embers went deeper into the manor, they entered the Catacombs and found Arthur next to his wife. Just as they lived, they died together in their final confrontation with Meredith refusing to let him go.[6]

Oh, hello there. I'm afraid we haven't met, but thank you for being here for my dear Lucy.

How can I help you?

The ceremony is ready to begin.

Well, this is a little embarrassing.

You see, I had my speech written out in my notebook, but I seem to have... Misplaced it.

It must be somewhere in this room. If you could help me find it, I would be eternally grateful!