Lord Banehollow is a level 46 dreadlord located in Shadow Hold in the contested territory of Felwood. He is the leader of Jaedenar, the seat of the Shadow Council on Azeroth. He is guarded by a wide variety of warlocks, demons, and his personal attendant Ur'dan. Lord Hel'nurath is his rival.

He appears in the Black City during 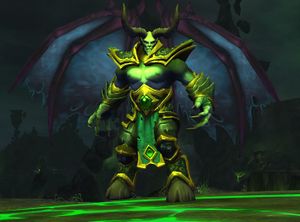 Banehollow at the Broken Shore.

Lord Banehollow, something of a demonic politician (and thus beyond even a normal concept of evil), serves as the emissary between the Burning Legion's remaining leaders and the Shadow Council in Shadow Hold in Felwood. He keeps Fel'dan under watchful eye.[1]