Lord Vincent Godfrey[2] is a renegade nobleman from Gilneas who opposed his king, Genn Greymane, after discovering that Genn and many of his people had been afflicted with the worgen curse. After committing suicide rather than acknowledge a worgen as his lord, Godfrey's body was recovered and reanimated by the Forsaken, but after turning on them as well, he fled into the abandoned ruins of Shadowfang Keep, where he and his followers remain.

Prior to the Second War, Godfrey was among the Gilnean nobles who accompanied King Genn Greymane to Lordaeron to create the Alliance of Lordaeron. Genn trusted his counsel but was always suspicious of his ambitions. Godfrey suggested that to stay in the good graces of their sister kingdoms for the benefit of trade and tariffs, Gilneas should only send a small token force instead of the whole Gilnean army, a sentiment echoed by Baron Ashbury. Genn noted that unlike Darius Crowley's empathetic urge to aid the other human nations, Godfrey's notion was a smart political play that ensured notoriety for himself, as he was the commander of Gilneas' standing militia. However, Genn also saw the wisdom in Godfrey's advice and stated that he would consider it.

Some time later, Genn told Godfrey of his intentions of constructing the Greymane Wall to seal Gilneas off from the rest of the world. Godfrey pointed out that while Genn was considering building the wall through the lands of Lord Marley, constructing it through a mountainous region in Lord Crowley's domain would make for a more secure natural barrier, although doing so would cut off the northern villages of Ambermill and Pyrewood. Genn warned that Darius might not take well to having his lands cut off, but Godfrey insisted that it was the best course of action for Gilneas. The fact that this placement of the wall would make Godfrey's own lands the most strategically valuable — as they would form the realm nearest to the wall and would thus be Gilneas' buffer to the outside — did not escape Genn, but he conceded that Godfrey was right, regardless of his personal motives. As Godfrey finished his goblet of wine, he fought the urge to smile.

The Fall of Gilneas 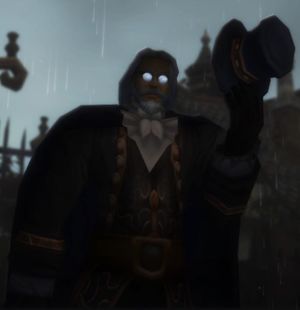 Godfrey before his death. 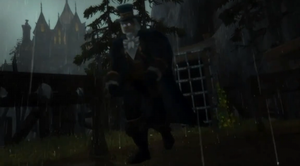 Lord Godfrey in the worgen cinematic.

Godfrey is first seen at Greymane Manor after Genn learns about the apparent death of Halford Ramsey. He was told to have the towns near the Blackwald go on full alert against the worgen that attacked Halford, and he also wanted the woods searched. Godfrey believed it was a waste of time to search, but he would make it happen.

A few days later, a number of nobles were asking Greymane about the Forsaken just outside their wall, the missing livestock in the countryside, and the Starlight Slasher murders. Godfrey asked what the king intended to do about the worgen, and Greymane replied he would instate a curfew. Godfrey scoffed, insisting he be given ten men and set loose on the Blackwald to hunt them. He accused Greymane of going soft, and proposed that he take a respite and leave the decision-making to someone else. Greymane told Godfrey to watch his treasonous tongue, then ordered him to leave.

Lord Vincent Godfrey spent his life defending the kingdom of Gilneas. When the worgen curse ravaged this land, Godfrey was one of the first Gilneans to take up arms against the beasts. During the evacuation of Gilneas City Godfrey argued with Genn about rescuing Lord Crowley and prefer leaving the traitor to be killed by the worgen rather than saving him.

The day of the worgen attack on Gilneas City, Godfrey and two guards witnessed Halford Ramsey and Belysra Starbreeze escaping the city and being trailed by feral worgen. One of the guards asked if they should intervene, but Godfrey wanted to see how it played out. Belysra fended off the beasts with the light of Elune, and Halford noticed Godfrey and the soldiers. Belysra called out to them that they were not his enemies, but Godfrey replied by shooting Halford in the chest. One of the soldiers asked what to do about Belysra, but Godfrey said whatever she is, she's not Gilnean and to leave her to the wolves.

Following the evacuation of Gilneas City, the cursed Gilnean hero is confronted by Godfrey in a cage in Duskhaven, who reminds them of what they were before the curse and revealing that they were spared because the Gilneans still hoped that they can be saved, wondering if there is still a shred of humanity left within them. Later the hero is found to have been put in stocks and Godfrey tells Krennan Aranas that it is "time to put this one down" in accordance with protocol. However, King Greymane intercedes, asking if those who gave their lives so the survivors could escape were following "protocol". This interaction and later actions reveal that Godfrey is prejudiced against those that have been afflicted with the worgen curse. After the Forsaken started their invasion, Godfrey went to the fields near Duskhaven where he worked with the adventurer to fight the forsaken on the battlefield, the two captains of Forsaken ships and to kill the leader of the assault Dark Ranger Thyala.

Some time later, he accompanied Genn to Tal'doren where he met Darius and demanded to support the war against the Forsaken. After Genn revealed his worgen form to them, Darius agreed. Days later, Greymane traveled to Tempest's Reach with Godfrey and Krennan Aranas. While in the carriage, Godfrey held Greymane at gunpoint and decided that the only way to negotiate with the Forsaken was if he had something they wanted. Krennan called Godfrey an idiot, warning him that Greymane was a worgen, and Godfrey tossed the alchemist out of the carriage in response. At Tempest's Reach, Godfrey told the king it would not be long now before he began negotiating with the Forsaken. He kidnaps Greymane and holds him for ransom, believing he would be able to save Gilneas if he turned the king over to the Forsaken. A worgen adventurer sent by Krennan killed Baron Ashbury and Lord Walden and suddenly appeared behind him. Greymane told his old friend it was over and not to make it difficult, but in response Godfrey jumped off the cliffside, deciding he'd rather die than have a worgen for a king.

Lord Godfrey is later raised as a Forsaken himself by the Val'kyr. Once he returned to "life," he led the attack against Pyrewood Village, where Lord Crowley and other survivors of Gilneas had settled. During this time he also used necromancy to resurrect Sean Dempsey, who had been eaten by crocolisks, only to murder him again. He later kidnaps Crowley's daughter Lorna and holds her for ransom as commanded by Sylvanas Windrunner, where he would rather kill her and raise her as a member of the forsaken, hoping to force a ceasefire between the Gilneas Liberation Front and the Forsaken. After Crowley surrenders to Sylvanas at the shattered Greymane Wall Godfrey betrays her, shooting and killing the Banshee Queen (who is shortly afterward resurrected by the Val'kyr). Now wanted by both the Alliance and the Horde, Godfrey made a run for nearby Shadowfang Keep.

Surrounded by remnants of the Scourge and the whispering ghosts of those who've met their end in the keep over the years, Godfrey now plots the downfall of both the Alliance and Horde within Shadowfang Keep.[3]

Lord Godfrey replaces Archmage Arugal as the final boss of Shadowfang Keep in both normal and heroic modes. Both Deathstalker Commander Belmont and Ivar Bloodfang want him dead.

As a quest giver

In the Ruins of Gilneas:

No hard feelings, <name>. You might be a feral killing machine, but it looks like you're with us for now.

When encountering a cowering forsaken:

When killing a cowering forsaken:

"Weakness... that is all you have managed to show me. Genn, you and those other disgusting mongrels that plague Gilneas, I sought death before I would serve you again. Enter the Banshee Queen, Sylvanas. You showed your true nature when you allowed Crowley to leave with his life, and so I took yours instead. You would do well to remember all that I have done, but if you still dare to enter my keep, all you will find is the lonely silence of death."[4]

Godfrey appears as a legendary card for the warlock class in the The Witchwood expansion for Hearthstone. His flavor text reads: "Betrayed the Alliance. Betrayed the Horde. All for 200 achievement points and a sweet, sweet hat."

He also appears as a boss in the Monster Hunt single-player experience, serving as the nemesis and possible final boss of the Cannoneer class represented by Darius Crowley. As implied in the Mysterious Missives series of official blog posts and Hagatha the Witch's in-game dialogue before the boss encounter, in Hearthstone lore Godfrey has struck a deal with Hagatha in order to exact his revenge on Crowley.