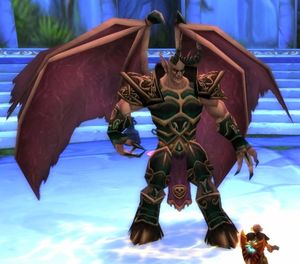 Lord Hel'nurath (also spelled Lord Hel'Nurath) is a ruler of Xoroth. He appears as a level 112 rare elite demon at the Dark Stockades on the Broken Shore.

He was then a member of the nathrezim ruling over the world of Xoroth and its stables. You had to summon one of his dreadsteeds in Dire Maul West and defeat him when he entered the fight to be able to obtain a dreadsteed on the questline for the warlock epic mount.

Lord Hel'nurath is now found as a rare elite on the Broken Shore. His greatest general is the fel knight Arax'ath, and the nathrezim gifted him the single wrathsteed he created.[1]