Lord Maxwell Tyrosus, nicknamed Max by Argus Highbeacon,[2] is a human paladin located at Light's Hope Chapel in the Eastern Plaguelands, and during the third invasion of the Burning Legion, in the Sanctum of Light.

He was one of the first to join the Argent Dawn and quickly rose through the ranks to great prominence, second only to Tirion Fordring himself. Whether he was fighting against the scourge of Naxxramas or the very lord of the Scourge, Tyrosus has always remained a steadfast leader and a true champion of the Light.[3]

Lord Maxwell Tyrosus joined Alexandros Mograine's crusade on the undead and insisted on working with other races. Maxwell accompanied his lord and comrades, Brigitte Abbendis and Fairbanks to the Scarlet Monastery where they found troll Zabra Hexx. While Brigitte insisted on killing him, he stopped her to speak with the troll.

Following Alexandros' demise, the order of the crusade became more zealous and fanatic and reformed itself into the Scarlet Crusade. He left the order and joined the Argent Dawn, eventually succeeding Lord Raymond George and becoming its leader in the Plaguelands and one of the highest-ranking officers in the organization as a whole. He found Darion Mograine and let him join the order. Maxwell brought him to the Chillwind Point and learned that Alexandros' spirit may be alive. He wanted to help Darion to attack Naxxramas but Darion insisted that he is very important for the Dawn. Instead, Darion found volunteers at the Point.[4]

Maxwell and the rest of the Dawn moved to the Light's Hope Chapel where the Scourge was about to attack them. Darion, having visited Tirion Fordring, returned to the Chapel and Maxwell revealed to him the Chapel's secret. When the Scourge attacked, he alongside other Argent Dawn members defended the place and witnessed the sacrifice of Darion. He then remained in contact with Tirion Fordring.

Lord Maxwell Tyrosus dealt a critical blow to Kirkessen the Zealous, a powerful lich who reported directly to the Lich King himself, during the Siege of the Sanguine, and the lich is now no longer able to assume a corporeal form.[5]

Lord Maxwell Tyrosus resides in Light's Hope Chapel and rarely sees visitors from outside his organization, as it has been years since he has granted audience to outsiders.[6] From there he coordinates the troops of the Argent Dawn to fight the Scourge in the Eastern Plaguelands, and was planning with Duke Nicholas Zverenhoff an offensive on Stratholme to eliminate Baron Rivendare.

He also received a husk from a silithid by an adventurer sent by Colossus Researcher Sophia, which he thought to be useful in the war against the Scourge.[7]

During the Battle for Light's Hope Chapel, Maxwell led the troops of the Argent Dawn against the Death Knights of Acherus, alongside Duke Nicholas Zverenhoff and Korfax, Champion of the Light.

When Highlord Tirion Fordring joined the battle, Maxwell sided with him in front of Highlord Darion Mograine and his defeated death knights.[8] He then witnessed the defeat of the Lich King against the Ashbringer, and the merger of the Argent Dawn with the remains of the Order of the Silver Hand which became the Argent Crusade under the command of Tirion Fordring, he subsequently joined the new order.

As the newly formed Argent Crusade set out to annihilate the Scourge in Northrend, Maxwell remained the Crusade's operations chief in the Eastern Plaguelands. He began the fortification of Light's Hope Chapel, then undertook to take over the old watchtowers of the region and to restore them.

Following the fall of the Lich King, Maxwell continued with the admission of new members in the Argent Crusade while reducing the Scourge numbers in the region through some imposed trials.[9]

The first test he gives is to go behind the chapel and enter the small crypt, where the bodies of fallen heroes who gave their lives in the war against the Scourge are located, then to read the

[Argent Scroll] in order to summon and fight the spirit of Maxwell's predecessor, Lord Raymond George.[10]

The second test is to reduce the number of undead and cultists present in the Noxious Glade, because despite their proximity to the chapel the crusade could not completely remove them.[11]

Finally, the last test he gives is once again to reduce the number of undead present this time in Northdale.[12]

Following the failed Argent Crusade's assault of the Broken Shore, and the loss of Highlord Tirion Fordring during the Battle for Broken Shore, Maxwell journeys to Dalaran came into contact with a paladin champion. There he informs the paladin that the Legion has devastated the forces of the Argent Crusade, and that it was necessary to reunite those who still have the conviction to save their home.[13]

He later informed the paladin champion of the existence of holy artifacts that would give them a chance to stop the third invasion of the Burning Legion, and accompanied them in search of Ashbringer who was lost when Tirion Fordring was defeated.[14] Faced with the impossibility of finding the legendary weapon, Maxwell accompanied the paladin champion at Uther's Tomb in the Western Plaguelands to find answers from the ghost of the deceased paladin. After having exorcised the spirits and purified the graves of the deceased disturbed by the "death" of the Highlord,[15][16] they could finally communicate with Uther who revealed that Tirion yet lives.[17]

At Light's Hope Chapel, he rallied his forces to launch an attack on the Broken Shore in order to rescue Highlord Tirion,[18] with his troops he fought the demon army which awaited them under the orders of Jailer Zerus and found Tirion with whom he remained in his last moments, as the artifact was recovered by the paladin champion who repelled Balnazzar, before ordering that his body be transported to be buried amongst the ancient heroes of the Light buried beneath Light's Hope Chapel.[19] He also asked the paladin champion to clear the area where Tirion fell so the Silver Hand could sanctify it.

Inside the Sanctum of Light, where all of Azeroth's paladin orders have gathered, he announces the champion paladin as the heir of Highlord Tirion Fordring and the new leader of the reborn Order of the Silver Hand, to which the Argent Crusade he represents swears loyalty.[20] After the ceremony, he announced to the Highlord that as long they wield the Ashbringer, the Legion will do everything in their power to strike them down, and so he humbly submits himself to act as the eyes and the blade of the Highlord until his dying breath as a champion of the Silver Hand.[1]

Following the discovering of the

[Light's Heart], that crashed towards the coast of Suramar, and listening to the message of the High Exarch Turalyon to save Azeroth by bringing the heart of the naaru Xe'ra to the Prophet Velen, Maxwell is present to the meeting requested by Lord Grayson Shadowbreaker, as a leader of the Order, where he asks the Highlord what will be the next actions of the Order following Turalyon's warning.[21][22]

When the Knights of the Ebon Blade invaded the chapel, in order to raise Tirion Fordring as a death knight to be a part of the Four Horsemen, Maxwell is subdued by Darion Mograine as he tried to protect the entrance to the sanctum.[23]

Maxwell participated in the Battle for the Exodar, battling against High General Rakeesh alongside the Highlord and Lady Liadrin to protect the draenei people and the naaru O'ros, targeted by the Legion so that they could not unlock the knowledge contained within Light's Heart.[24]

Later he is present during the battle at the Netherlight Temple with the troops of the Silver Hand who came to support the priests of the Conclave. He fought against the hordes of demons summoned by Balnazzar, until Lothraxion and the Army of the Light came and help them to eliminate the dreadlord for good.[25]

We must not allow that to come to pass - you are our single greatest hope to drive the demons back to the holes they crawled out of.

I humbly submit myself to your direct service, <name>. I will act as your eyes and blade where you are not; I will carry out your will until my dying breath.

Lord Maxwell Tyrosus at your service.[1]

With the Order of the Silver Hand reformed under your leadership, we have new direction and guidance.

We have much work ahead of us. 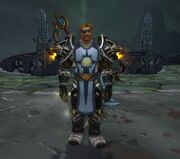 Do you feel it as well, Highlord? Something isn't right.

I've recovered a dark, but powerful crystal, Maxwell. If we can harness its power it might prove useful against the Legion.

I trust your wisdom, Highlord, but I can't say that this sits well with me.

How can we ever be sure that the power within that thing won't... change you?

There cannot be Light without Shadow. We must strike a balance.

You're right, but how can we ever hope to tap into that safely? Our power will only...

He is older than most Argent Dawn knights, at only a little over 40 years old,[26] but is still in peak physical condition.[27] He's starting to show his age, though he's still a valiant fighter.[26] Some say that Lord Maxwell Tyrosus, once a mighty knight, founded it in disgust after Arthas's betrayal, becoming its nominal head.[28] He is classified as a paladin and a warrior.[27]