Lord Rhyolith is a magma giant boss of the Firelands raid instance. During

"Heroes face a difficult challenge: attack this massive magma giant's bulk while forcing him to move against his will among volcanic eruptions that ultimately spell his doom... or yours."[1]

Rhyolith is one of the most ancient elementals in existence, born from the primordial fires that forged Azeroth itself. He is responsible for the creation of new elementals in the Firelands and still possesses a searing hatred of the titans for what he considers their monumental arrogance in relocating him.

Rhyolith made his appearance in Hyjal attacking the Sanctuary of Malorne. However, Malfurion summoned Malorne, who ultimately defeated Rhyolith. 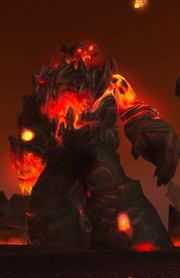 Lord Rhyolith in World of Warcraft.

Lord Rhyolith ignores players while his armor is intact, but they can attack his feet to control his movement.

Stage Two: Now you will BURN!

Lord Rhyolith in phase 2 of the boss fight.

Phase One: Drive his feet

The goal of phase one is to ablate his obsidian armor and damage him enough to start phase two. Causing the boss to step on active volcanoes is critical to this process. However, most of the raid will be concentrating on staying alive by destroying adds and avoiding lava and other environmental damage.

Tanks are not on the boss during phase one. They are instead managing adds. One tank should be responsible for the Sparks, pulling them away from the group, while the other tank gathers the Fragments for AoE.

When the battle starts a UI element appears which illustrates how players are affecting Rhyolith's navigation. Causing damage to one of Rhyolith's feet causes him to turn toward that foot. A yellow bar, if present, indicates which direction he is turning. Typically only a few players are assigned foot duty. Note: the longer phase 1 lasts, the more damage Rhyolith's phase 2 abilities will last, as he will continue gaining a stacking damage buff once his armor is gone until he reaches 25% and transitions to phase 2. The DPS on foot duty should always be damaging one of the feet, even if the goal is to keep him moving straight (in this case, split dps between the feet).

The exact rules governing this foot-driving are poorly understood at this point, but the feet will steadily restore toward center, and this occurs more quickly the faster he is turning. What is well-understood is that if he is not maneuvered correctly he will reach the lava at the edge of the platform and Drink Magma, causing massive damage to the raid and very likely a wipe. Also, you want to drive him over active volcanoes to ablate his Obsidian Armor. Another desirable result of volcano-stomping is that it ends that volcano's fire damage plaguing the raid. Inactive volcanoes can be run over as well. This will not reduce his armor, but will prevent that volcano from being activated later in the fight.

While the foot team is managing Rhyolith's position the rest of the raid is dealing with the Fragments and Sparks that spawn periodically throughout the fight. Fragments spawn in a swarm and should be destroyed before their explosions (30 second timer) damage the raid. Sparks spawn one at a time and have a pulsing aura that damages nearby players. As long as they are alive they are stacking Infernal Rage which increases the damage they deal to the tank and other nearby players.

Once the boss reaches 25%, he becomes molten, becomes tankable, and can be attacked directly. The raid should group up behind the boss for AoE healing and burn the boss down as quickly as possible.

The feet-driving mechanic still comes in to play, and the 80% damage-taken reduction is annoying until Rhyolith has run over a few volcanoes. Focus the Liquid Obsidian adds in heroic mode and clear out the rest of the adds, as they spawn fairly frequently. Save cooldowns until the legs are taking more damage (or he reaches 50% health) to make the burst more effective.

Armor Shattered
Eons I have slept undisturbed... Now this... Creatures of flesh, now you will BURN!