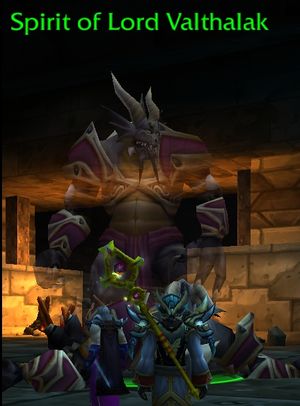 The spirit of Lord Valthalak that spawns after killing him.

Lord Valthalak was a drakonid boss summoned in Upper Blackrock Spire by a Brazier of Beckoning. He was the last boss in the Dungeon Set 2 quest line.

He was still summonable as of patch 5.4, but one would have to possess (or find another that possesses) a

[Brazier of Invocation]. His health was significantly buffed in Mists of Pandaria, which made for a very long fight.

Valthalak has a caster type weak melee attack in phase 1. A slow one that does 400-500 damage to a warrior.

A shadow-based, chain life drain, which obviously translates into healing for himself. Hits for 750 Shadow damage on the first target, and will jump to another target if anyone is close enough. Each time it jumps, it doubles in damage in the manner of Holy Wrath from High Priest Venoxis from Zul'Gurub. At the 4th jump, the damage will be 6k and lethal for most people. Being a life-drain, all damage dealt will heal Valthalak.

The chain life drain (noted above) will replenish his health, so it is important that you have a warrior tank the mob alone (until phase 2). Alternately, if you have more people in melee range, you will need to interrupt when he casts the life drain. It will show as a purple beam that chains between friendly targets.

Have one or two people mana drain him (his regen and total mana are quite low). The spell is also interruptible using standard methods (

[Counterspell], etc.). A mod such as EnemyCast or Spell Alert can be helpful. All his spells will sadly not show up on the standard 'EnemyCastBar' you can have displayed below the enemy portrait.

Lord Valthalak apparently has no specific animations when he heals. Warriors with

[Mortal Strike] would greatly assist, as well as rogues with wound poisons. It is also possible to just DPS through the heals. The rate that Valthalak heals himself appears to be random.

These spawn two at a time throughout phase 1. They will run towards someone in your raid (can include pets) and eventually cast a mindflay-like Defile ability (a purple vile beam). Defile cannot be dispelled/cleansed and stuns its target for ten seconds. If the spell is allowed to complete, its target dies and is transformed into an additional Spectral Assassin. The assassins have around 1,500 hp with little to no armor and resistances.

At 40% health he will switch weapons and start hitting very hard. He stops spawning Spectral Assassins but still does Shadow Wrath if he has mana.

At 15% health, he will frequently cast an AoE

[Shadow Bolt] on the entire raid in addition to the changes in phase 2.

This strategy results in an easy, but long fight, usually 7–10 minutes. Your healers need to come prepared for an endurance fight, other than that it makes for an easy run.

He is still a tough fight at level 80 even in Tier 10-level gear if you intend to solo him. The spectral assassins must be dealt with immediately before they can cast Defile with its 10-second stun; otherwise, Valthalak will get 10 seconds of free DPS and healing if Life Drain is also up (meaning death to cloth-wearing characters). Life Drain also works on pets/minions, which makes this ability all the more dangerous to either you or your pet, depending on which one is at the end of the chain. This is a major DPS race to try to keep more than a couple of spectral assassins from spawning while keeping Valthalak's damaging abilities to a minimum. Be prepared for several deaths while you get the feel of the fight.

Strangely, he was categorized as a humanoid, and not as a dragonkin like other drakonid prior to Cataclysm.