From Wowpedia
(Redirected from Lord of Outland)
Jump to: navigation, search

This article is about the Warcraft III mission. For the characters with the title "Lord of Outland", see Magtheridon and Illidan Stormrage.

Lord of Outland is chapter 6 of Curse of the Blood Elves. It was the final confrontation between Magtheridon's demonic legions and Illidan Stormrage's followers for the control of Outland.

Later that day, at the base of Magtheridon's Black Citadel, Illidan marshals his forces for their final strike.

The Pit Lord Magtheridon rules with the absolute power of the Black Citadel and its regime of Demonic minions. Slaughter Magtheridon's two dark lieutenants, the Master of Pain and the Mistress of Torment, in order to seize their Shadowkeys and gain access to his throne chamber.

The gates to Magtheridon's throne chamber have been thrown wide open, leaving the Pit Lord vulnerable to attack. Destroy Magtheridon so that Lord Illidan can claim power over Outland and take the Citadel as his fortress.

The seemingly impenetrable defenses of Magtheridon's Black Citadel are powered by a series of magical Generators. If someone could sneak past the guardians and destroy the Generators, each layer of defenses could be negated, allowing easy access to the rest of the stronghold. Perhaps Akama and his Draenei followers would be up to the task.

Within the many halls of the Black Citadel lie old armaments of now-forgotten wars. Find and seize the old Chaos Orc Demolishers so that you can bring them to bear against Magtheridon's defenses.

After successfully closing Magtheridon's Shadow Portals and thereby cutting off the mighty Pit Lord's supply of reinforcements, Illidan, Kael'thas Sunstrider and Lady Vashj marched upon the Black Temple. Magtheridon was outraged by this development, but typically for his arrogant kind he was not unduly worried- his citadel was extremely well protected by war machines and armies of Fel orcs and demons, led by the powerful Mistress of Torment and Master of Pain. As the Illidan's forces made their approach he swore to crush the Demon Hunter and his retainers.

Illidan split his forces, joining Kael in a frontal assault of the Temple whilst Vashj and her Naga insinuated themselves into the vast citadel's sewer and aqueduct system. Kael and Illidan immediately ran into problems in the form of Magtheridon's infernal war machines, which slaughtered many blood elves as they assaulted the Temple gates. Fortunately, Akama and his draenei arrived, pledging their services to Illidan. They were able to infiltrate the Temple and destroy the network crystals which powered the war machines, allowing Kael and Illidan's forces to overrun the gates. They claimed an armoury containing several fel orc demolishers, which they used to blast apart the fel orc encampments. Using the shadowy might of the Draenei again and again to sabotage Magtheridon's war machines, Illidan and Kael swept aside the fel orcs and demons to battle and then kill the Master of Pain.

Meanwhile, Vashj and her small group of Naga routed several flotillas sent to engage them and destroyed two subterranean bases, the fel orcs proving no match for the awesome might of Vashj's Royal Guard. With her remaining troops Vashj then fought the Mistress of Torment and her retinue, the Sea Witch eventually overcoming the vicious Succubus.

With both of his lieutenants dead, the door to Magtheridon's chambers opened. Illidan, Kael, Akama and Vashj joined forces along with several captive fel orcs and demons and assaulted the Pit Lord directly. After a terrible battle which killed many of the Illidan's forces, Magtheridon was finally defeated.

Magtheridon was shocked by his defeat at the hands of these strangers. The beaten pit lord asked Illidan if he was an agent of the Burning Legion sent to test him. Illidan laughed and replied that he had come to replace Magtheridon.

Illidan claimed himself Lord of Outland, and the remaining fel orcs and demons bowed down to their new master. However, the Betrayer's triumph was short-lived; barely an hour after the battle, the skies above the Black Temple clouded and the spectral form of Kil'jaeden appeared, demanding Illidan complete his task of destroying the Lich King. Cowed, Illidan once again gathered the Blood Elves and the Naga to him and marched upon Northrend.

As with Maiev Shadowsong, Magtheridon was originally thought dead, but instead Illidan held him captive underneath the Hellfire Citadel, using his blood to create more fel orcs.

A fel orc approaches Magtheridon in his throne room.

Magtheridon: These upstarts are tiresome gnats, nothing more. The might of Magtheridon cannot be denied! I am the Lord of Outland! Those who dispute my rule will soon regret their folly.
Meanwhile, outside the citadel, Illidan and Kael'thas' blood elf forces approach the entnance of the stronghold.

Illidan Stormrage: Magtheridon has grown strong over the years, but he has had few real foes to contend with. He has become decadent and complacent. The boisterous cur cannot match our cunning or our will.
Kael'thas' spell breakers begin charging into the citadel in waves and are mowed down by the infernal machines guarding the entrance.

Prince Kael'thas: This will be a glorious battle, master. Though Magtheridon's forces vastly outnumber ours, your warriors are prepared to fight to the end.

Illidan Stormrage: I am pleased by your people's zeal, young Kael. Their spirits and powers have been honed in this harsh wilderness. Their courage alone may be enough to...

Akama: We draenei have fought the orcs and their demon masters for generations. Now, at last, we will end their curse forever. We are yours to command, Lord Illidan.
Akama and his forces sneak into the citadel and destroy the generator powering the citadel entry's defenses.

Illidan Stormrage: As I promised, your people shall have their vengeance, Akama. By night's end, we will all be drunk with it. Vashj, Kael--give the final order to strike. The hour of wrath has come!

Vashj: You've done it, Lord Illidan! Their defenses are broken! Only Magtheridon and his lackeys stand before us!

Magtheridon: I do not know you, stranger, but your power is vast. Are you an agent of the Legion? Have you been sent to test me?
Illidan laughs loudly.

Illidan Stormrage: I have come to replace you. You're a relic, Magtheridon, a ghost of a past age. The future is mine. From this moment on, Outland and all of its denizens will bow to me.
Leaving Magtheridon's throne room, Illidan speaks to Magtheridon's fel orc and demon army from atop a rise.

Illidan Stormrage: Hear me now, you trembling mortals! I am your lord and master! Illidan reigns supreme!

Illidan Stormrage: Strike them down! Show these tired wretches what true fear is! 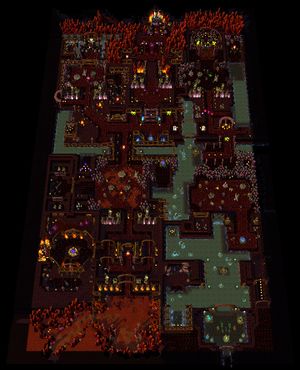