Lordaeron's palace standing in the center of the city. 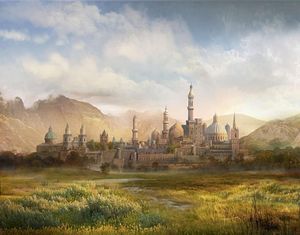 The palace's great dome and spires.

The palace of Capital City was the seat of power of the kingdom of Lordaeron. Here, King Terenas Menethil II and his ancestors ruled over their country from the imperial chamber. The most significant treaties in all of Lordaeron had been agreed and signed in the imperial hall, which overlooks much of the city. Behind the palace itself are the gardens.

The Ruined Palace is located above the Forsaken capital of Undercity, a city that spans beneath much of Lordaeron's ruins. Terenas Menethil's throne room and the royal crypts are still intact. The bloodstain where Arthas slew his father can still be seen. The magnificent gardens are also accessible, though they have grown wild and play home to lurking beasts.[1]