Not to be confused with imperial hall. 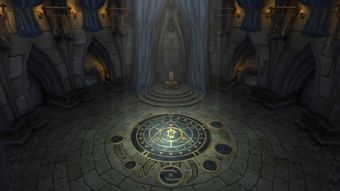 The imperial chamber in World of Warcraft.

The imperial chamber[1] (or Lordaeron Throne Room)[2] was the throne room of King Terenas Menethil's royal palace, in Capital City. The chamber has silken curtains, golden chandeliers, and a pure white marble floor which has intricate designs with concentric circles and a triangle in the middle. At center of the triangle is another circle with the golden seal of Lordaeron.[3][4] Terenas entertained honored guests here at times, especially Lord Prestor,[5] and organized war councils here as well. It is on his own thrown that Terenas was assassinated by his son, Arthas Menethil.

The imperial chamber in Warcraft III.

Lordaeron's Capital City stood for centuries, a monument to humanity's might. During the Third War, Prince Arthas slew his father King Terenas in Lordaeron's throne room, and ransacked the city.[6] 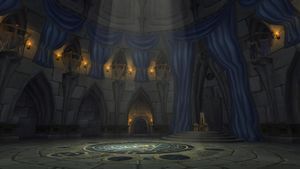 The imperial chamber is still part of the entryway into the catacombs, expanded to become the Undercity. One can spot the dried blood of Terenas on his throne, and his final words still faintly echo through the chamber.

Quotes
You no longer need to bear the weight of your crown. I've taken care of everything.
What is this? What are you doing my son?
Succeeding you, father.
Let your eyes be closed.
This kingdom shall fall, and from the ashes shall arise a new order that will shake the very foundations of the world.

The Alliance launched an assault to reclaim the lost kingdom in the Battle for Lordaeron. King Anduin Wrynn and his allies stepped inside the Throne Room, shortly before Sylvanas Windrunner triggered her trap and blighted the entire Keep.