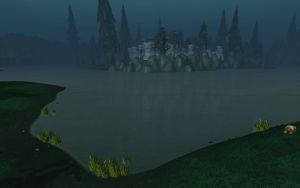 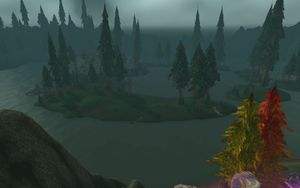 A wider shot with the Dawning Isles at the lake's center.

Lordamere Lake (or Lake Lordamere)[1] is one of the largest lakes in the Eastern Kingdoms, rivaled only by Darrowmere Lake to the east. Along with Darrowmere, this lake has been marked by many events that took place around it. Here, many human kingdoms, at the age of the Alliance of Lordaeron, that were prosperous, have been found around the lake's shores and nearby mountains, including Lordaeron, Dalaran and Alterac. Lordamere was very likely given its name from the nearby Capital City of the kingdom of Lordaeron which was built on its northern shores and which was named after Lordain.

Some time after the Third War, Lady Vashj and her naga retreated here after the battle at the ruins of Dalaran.[2]

The lake, for a time, acted as a natural barrier between the Forsaken lands of Tirisfal Glades and Silverpine Forest and the contested lands of the Alterac Mountains. At its center lie the Dawning Isles, and Fenris Isle which was taken over by agents of the Scourge, who were being attacked by the Forsaken.[3] However, they were ultimately removed by the worgen.[4] Fenris Isle was later taken by human refugees of Hillsbrad Foothills as a safe haven from the Forsaken. East of Fenris Isle, the small group of islands called the Dawning Isles are where the Vile Fin murlocs have made their claim overrunning them.

At some point, the isle, namely its keep, was overtaken by the Forsaken led by Deathstalker Hayward. By the time of the Fourth War, however, it was ultimately claimed by the Alliance again,[5] as the Bloodfang Pack overtook the Horde forces there and claimed it for themselves. The Horde later distracted these forces to evacuate Undercity refugees across the lake.[6]

This freshwater lake is enormous, occupying a great fraction of Lordaeron's midwest. In years past, the lake served as a source of fresh water and fish for Lordaeron's kingdoms. Now, Lordamere's isles are infested with monsters and its shores polluted with undead filth. The lake borders five separate regions and provides an untapped means of transport between these areas.[7]

Lordamere contains an island called Fenris Isle on which the ruined Fenris Keep lies.[8] On its southern shore, you will find Dalaran.[9]