For the Community Manager, see Lore (CM). For other uses, see Lore (disambiguation). 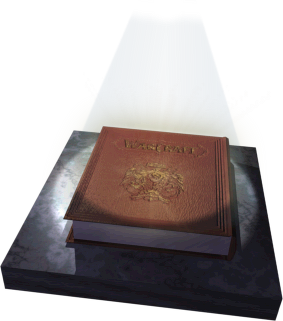 Lore in the Warcraft series of games is a term used for "background story". The use of the term stems from Blizzard's snippets of "lore" for many of the multiplayer maps in their Warcraft RTS games, although how much of it has a relationship to the main Warcraft universe storyline is unclear.

What is "canon" lore?

Canon is a term oft-used to refer to official lore, specifically the fictional accounts in the Warcraft universe. It is used to define which lore should be considered a genuine part of the universe's history.

In contrast, 'non-canon' information, while often containing characters and depicting events from canon sources, is not necessarily a reliable source of official information regarding the Warcraft universe. An example of non-canon lore might be a piece of fan fiction which introduces new characters or events, or expands upon the background of a known character such as Thrall.

Characters, events and items from non-canon sources do not necessarily exist in the official Warcraft universe. Non-canon versions of known events may differ substantially from official sources. Non-canon sources frequently feature characters from canon lore, but their exploits in these sources are not considered canon.

Note that even canon lore is sometimes contradictory (or retconned), often representing the beliefs or perspectives of an individual or group, rather than any absolute truth. Nonetheless, the beliefs themselves can be considered a genuine part of the Warcraft universe as flavor lore, regardless of their accuracy.

Which sources are canon and non-canon?

The representation of the world in World of Warcraft is not entirely canon as Azeroth's scale had to be reduced for gameplay purposes. For example, Ironforge is a lot bigger than we see in the game.[26] Similarly, Lordaeron is bigger in lore as evidenced in the Battle for Azeroth cinematic. The Chronicle series also offers a more accurate scale of the world, continents and islands, than the in-game world map; for instance, the Broken Isles are shown to be roughly the size of the Howling Fjord, and Kul Tiras is about the size of Gilneas, compared to the in-game map.

For example of continental size, Kalimdor in-game is about 20,920 yards, or roughly 19 kilometers long from the bottom of Uldum to the tip of Winterspring. When compared to Africa in real life, which is about 8,000 kilometers long, Kalimdor is a meager 0.002375% the size of Africa. As such, Kalimdor would be somewhere around 421 times longer in lore than it is in-game if the size of Azeroth is comparable to Earth and Kalimdor to Africa.

Dungeons, quests, mobs and other

Sometimes, player actions in dungeons are not taken into consideration, as observed in the story of Blackfathom Deeps. Despite the fact that the players / adventurers killed its inhabitants, when the dungeon was updated, it was stated that the inhabitants were killed by the new inhabitants instead of players / adventurers. Another example may be seen in the Dagran Thaurissan encounter where players from both factions killed the Emperor, but The Shattering: Prelude to Cataclysm established that Dagran was killed by the Alliance agents. Another one may be seen in the original Scarlet Monastery dungeon with the Ashbringer event which were made non-canon as they were retconned by the Ashbringer comic.

Several quests and quest lines become non-canon and retconned when overwritten by a later source of lore such as the ending of the Onyxia questline (originally available since Vanilla) being replaced by the story of The Comic (happening between the events of The Burning Crusade and Wrath of the Lich King).

In several occasions, Cataclysm brought continuity errors, such as mobs being killed (their heads being brought to the quest givers) but remained alive after the revamp (such as the deaths of Weldon Barov and Alexi Barov). Sometimes, these "deaths" were explained as having evaded death and being just wounded as in case of Lieutenant Valorcall or Vanessa VanCleef.

The final cinematic of Warlords of Draenor doesn't seem to be entirely canon as Blizzard stated that Archimonde died in the Twisting Nether instead of at the Black Gate in Tanaan Jungle on alternate Draenor.

Wowpedia strives to have a neutral point of view on official lore due to it being rarely discussed by Blizzard, although examples exist:

A lot of times... depending on when one thing gets started during another, we happen to be in the middle of the game, or doing the manga thing for instance or this comic series specifically, we try to engineer as much inner play as possible. Like characters in the manga series showing up in Netherstorm and we are doing stuff like that, so we want to make everything feels as continuity friendly and as integrated as possible. Cause that would make it cool as if all its moving, right.[28]

...As more content is added to a given universe, by different teams, there is always the danger of unintentionally contradicting existing lore. But we have never intentionally done it. When something goes out the door at Blizzard—in a game, a novel, a manga, or anything other than mods or the table-top RPG—it's canon. This can be quite unwieldy; someone may have made a decision 12 years ago that was a well-reasoned, smart choice back then, but boxes us in today… but that's the hazard of game writing. We have to find a way to live with it and still tell our story.[1]

Sometimes there is an area where we haven't established exactly what happened, and we have room to define it at need. When we do this, some think that we've "retconned" it, but it's only retconning if we actively contradict known lore, not if we elaborate on something that was not defined.[1]

While we cannot stop the use of the term "canon" in talk page discussions, the term is not allowed in articles. The only exceptions are when one is denoting RPG information, or when verifiable public quotes from actual first-party Blizzard employees (such as Chris Metzen) are allowed in articles, and then only if there are direct links to the sources of the quotes.

A library full of lore.

Scrolls of Lore - A lore site and forum.

Blizzard Watch Know Your Lore - Has a weekly lore feature.