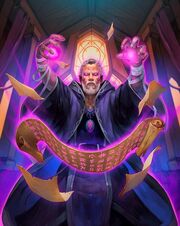 [Corruptor's Scourgestone]. As we can tell from his name, he was once the keeper of knowledge, knowledge that has sadly been lost, however, as he is now a shambling, unintelligent monster.

Lorekeeper Polkelt has a chance to drop one of the following items. It is not guaranteed, however, that he will drop anything at all.

Polkelt's appears as a neutral legendary card in the Scholomance Academy expansion for Hearthstone. His flavor text reads: "quicksort [] = [] quicksort (x:xs) = quicksort small ++ (x : quicksort large) where small = [y | y <- xs, y <= x] large = [y | y <- xs, y > x]", which is a valid quicksort algorithm in the Haskell programming language and a reference to his ability to sort your deck from highest cost to lowest cost.