From Wowpedia
(Redirected from Loreth'Aran)
Jump to: navigation, search 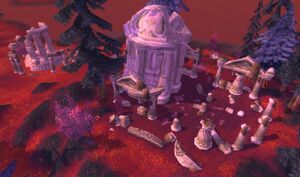 The Ruins of Loreth'Aran are ancient remains of a large night elven city that was destroyed during the Great Sundering. They can be found in northeastern Bloodmyst Isle.[61, 47] 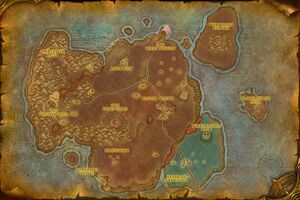 Further ruins are located to the northeast on Wyrmscar Island.

The night elves who once inhabited this city were blessed by the Green dragonflight and its queen Ysera, and the Dragon Riders of Loreth'Aran rode these powerful green dragons into battle while also living alongside them. The city was destroyed when the black dragonflight betrayed their green kin and descended upon the unwary night elves and green dragons. Led by a lieutenant of Deathwing, the fearsome Razormaw, the black dragonflight wiped out Loreth'Aran and its defenders in a savage maelstrom of flame and death. [1]

The city of Loreth'Aran's destruction was made complete by the cataclysm, as the ocean swept in and the earth erupted, leaving only a few remaining ruins scattered across separate islands where once a shining city stood.

Wyrmscar Island is now home to bones, the restless spirits of slain green whelplings, and the ghost of Prince Toreth, a night elf prince of Loreth'Aran. Prince Toreth beseeches adventurers to retrieve stolen dragon bones, help lay the green whelpling spirits to rest and slay the evil shade of Razormaw, whose hatred is so great he remained even in death.[1] Parts of Loreth'Aran are also populated by Wrathscale naga.