Lorewalker Shuchun is a Lorewalker who travels around Pandaria in pursuits of knowledge and history, as well as protecting the artifacts from taken. She enjoys telling stories to teach a lesson instead of lecturing. She can be found near the bottom of the Path of a Hundred Steps leading from the Valley of the Four Winds to Kun-Lai Summit. She can also be seen during the Wanderer's Festival at Turtle Beach of Krasarang Wilds. 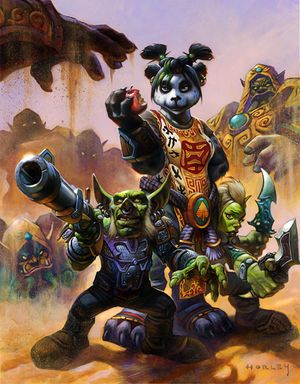 Shuchun, Druz, and Ziya within Di Chen and the Desert

After the mists had parted, the Horde and the Alliance arrived at Pandaria, bringing war and wreaking havoc. Trade Prince Gallywix of the Bilgewater Cartel had sent a raid of goblins (aptly dubbed the Plundersquad Initiative) which he set to the task of uncovering powerful artifacts on the continent. Aware of the invaders' presence, Shuchun was determined to stop their aggressive actions. She encountered them on the northern coast of Pandaria and stated her intention in order to "peacefully" resolve the problem. She later revealed the lorevault nearby to Gallywix's two subjects, Ziya and Druz. The goblins wanted to enter the vault and claim the artifacts stored within, yet Shuchun would not allow them to do so. But as she understood that the two goblins would be lost to the defense mechanism of the Lorevault, she decided to take them inside and endeavor to convince them that whatever they were doing, was a mistake.

As they faced various challenges based on pandaren legends within the vault, Druz and Ziya argued over the purpose of the war against the Alliance, the true nature of Trade Prince Gallywix, and the danger of seeking simple answers to complex problems, eventually realizing that their arguments were actually creating the traps. The source of these creations turned out to be a dangerous pandaren artifact: the Blank Scroll. Druz and Ziya attempted to claim the artifact, but after realizing her own warning was going unheeded, Lorewalker Shuchun activated the scroll and had the goblins live a vision of a terrible future:

Recognizing that the scroll could be used as a horribly dangerous weapon if people knew about it, Gallywix quietly hid it away from the world in the lower vault of his pleasure palace, but word eventually got out, as it always does, with the assumption that he had kept a powerful weapon for himself. The Bilgewater Cartel are declared traitors by Warchief Garrosh Hellscream for hiding it from him as he assumes they mean to rebel, and leads the Horde to destroy Bilgewater Harbor before assaulting the palace vaults and claiming the scroll for himself. With the power of the scroll giving him an unkillable legion of orcs that could be summoned at any time, the Exodar and Teldrassil are wiped off the map; appalled, the tauren and the Darkspear tribe fled to the Eastern Kingdoms, where they, the surviving Bilgewater goblins and the blood elves join forces with the Alliance. Druz and Ziya, acknowledging that it was their actions and their fault that things had come to this, survive long enough to be part of a hopeless last stand at Stormwind City which is destroyed by Garrosh's orcs, but they only rule the world until Azeroth itself was devastated after the Burning Legion reclaim the Dark Portal and horrors rise from the sea with no one to oppose them. The planet is burned to a lifeless hunk of rock.

Stunned by what they had seen, Druz decided to leave the Blank Scroll in Shuchun's paws to hide it somewhere safe elsewhere and assigned Ziya as her escort (officially, taking time off with pay). She promised Druz that the Blank Scroll would be hidden in a safe place before bidding him farewell and starting off with Ziya on their long journey.[1]

Grassy Cline
Wow - are you a <race> from beyond the mists? What a crazy age we're living in!
I just needed a moment to rest here. These steps can really take it out of you - going up OR down.

Wanderer's Festival
Welcome, <name>!
This is the "Wanderer's Festival," where we celebrate the deeds of the first pandaren explorer and gather on the beach to gaze out across the sea.
There was a time when the mists that cloaked Pandaria were so thick, sometimes you couldn't even see that large rock just off the shore there. Now look at it - what a glorious night! I'm glad you are here for this.

Legend has it that Liu Lang once set out to explore the seas beyond Pandaria on the back of a giant turtle. Every few years, he would come back, always seeking new explorers to travel with him. To this day, whenever a pandaren is daydreaming or staring off into space, we ask if they're "waiting for the turtle."
Most pandaren aren't very adventurous - they like to stay close to hearth and home. But some of us are still dreamers... Tonight we gather at Turtle Beach on the southern coast to gaze out at the sea and celebrate Liu Lang's spirit of adventure.
It's called the Wanderer's Festival.