This article is about the Kul Tiran fleet. For other fleets named similarly, see Third Fleet (disambiguation). 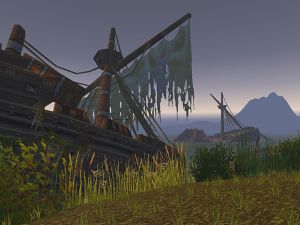 Wreckage of a part of the Lost Fleet in the Wetlands.

The Lost Fleet (also known as the Doomed Fleet,[1] or the Third Fleet,[2] and the Kul Tiras Third Fleet)[3] are the remnants of the Kul Tiras fleet which was under the command of Derek Proudmoore during the Second War.[4] They were destroyed by red dragons controlled by the Dragonmaw clan and subsequently sunk in Baradin Bay off the coast of northern Bluegill Marsh.[1] The ships located here are named Wave Mistress and Intrepid. A third ship, Flying Osprey, was part of the Third Fleet, but sank south of Menethil Harbor.[5] The only survivor was First Mate Fitzsimmons of the Wave Mistress.

The crew of the ships are cursed with undeath due to a forbidden artifact one of the vessels carried: A Cursed Eye of Paleth, a blackened orb hidden deep in the cargo hold of the Intrepid, kept locked away by its greedy commander, Captain Halyndor.[6] Its curse affects anyone trying to locate the orb, transforming the living temporarily into an illusionary undead form and weakening their spirits. The ghost of First Mate Snellig can be found on the nearby shore. He appears to be the only undead crew member that has retained his sanity.

At Fitzsimmons' urging, the Eye of Paleth was recovered by an adventurer and cleansed several years before the Cataclysm, however the curse was not lifted.[7] Fitzsimmons eventually drank himself to death, but even then did not escape the curse, and is damned to forever hear his crewmates calling for him.[8]

More shipwrecks of the fleet were found by the Horde in a different location on the bottom of the Great Sea decades later. The Horde obtained the corpses of Derek Proudmoore and Marshal M. Valentine from the wrecks.[9]