The Lost Isles is a zone added in World of Warcraft: Cataclysm. This small archipelago is located in the middle of the Great Sea on Azeroth, next to the Maelstrom. The goblins of the Bilgewater Cartel were shipwrecked on the Lost Isles after fleeing the devastation of Kezan. After surviving the perils of the island, the Goblins became allies of the Horde and have since started to rebuild their civilization in Azshara. The isles themselves can only be accessed during the goblin starting experience.

Following Deathwing's destruction of Kezan, the surviving goblins of the Bilgewater Cartel flee on Jastor Gallywix's Yacht. They wash up on the Lost Isles after being attacked unprovoked by an Alliance battleship. The player, Sassy Hardwrench, and Jastor Gallywix lead the survivors once onshore. The orc ship, Draka's Fury was shipwrecked as well. Losing their "cargo" to the Alliance, Aggra, the acting captain of the shipwrecked crew of the Draka's Fury, sends the goblins to recover the cargo, who is none other than Thrall himself. After humbling the greedy Gallywix and killing his cronies to ensure his cooperation, the goblins accompany Thrall back to Kalimdor, where the goblins begin constructing their new home in Azshara and swear allegiance to the Horde.

A race of intelligent monkeys mines Kaja'mite somewhere on the Isles.[1] Some of the monkeys seem to be enslaved by mysterious pygmies. The raptors and dinosaurs seem to have unique new models, shown on Blizzard-made concept art. The Isles are covered with exotic forests, bamboo and a new species of palm trees.

Message in a Bottle

Kezan And The Lost Isles[2]

If your reading this, I'm probably dead.

I got shipwrecked with Kezan's other uprooted goblins on some crazy place called the Lost Isles. Hostile jungle critters are making snacks out of my fellow castaways, and I have this sick feeling that I'm next. I'd go on about the strange flora and fauna here, but who cares about some dinky rock out in the middle of nowhere when my life is on the line? Lets focus on what I can do for you, and what you can do for me.

See, when Mount Kajaro started spewing molet rock all over Kezan, my workshop and all the precious inventions within got blown to smithereens. Luckily I storied the details of the creations in my noggin. Inside this bottle you'll find every schematic to my name...free to take. You put these babies to use, and you'll be living like a trade prince in no time. I only ask one tiny thing in return - make sure the world knows who invented these gems of goblin ingenuity. You know: build a few statues in my honor, name your kids after me, that sort of thing. Quite a deal, am I right?

Explories' League Note:It appears that the author's name was not included on this letter or the hastily scribbled schematics accompanying it.

The Lost Isles are some tropical islands located southwest of the Maelstrom and northwest of Kezan, in the Great Sea. 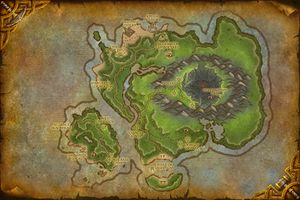 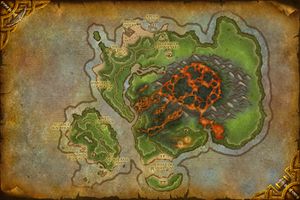 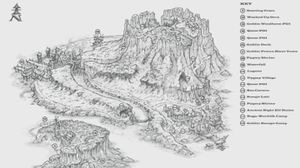 An early concept of the Lost Isles.

ScrollsofLore.com Of Goblins and Monkeys - That guy Nostra again.
Retrieved from "https://wow.gamepedia.com/index.php?title=Lost_Isles&oldid=5562290"
Categories: