For the lost one tribe with the same name, see Lost Ones (organization).
For the original race, see Draenei. For the race in general, see Eredar. For the not so much corrupted version, see Broken.

The Lost Ones[1][2][3][4][5][6] (sometimes also spelled in lower case)[7][8] are highly mutated and deformed draenei. They have devolved further than the Broken and many have been reduced to savage and primitive beasts.

The name has several origins. A tribe in the Swamp of Sorrows was called this way because they mourned their former world that they were homesick for, being unable to return since the Dark Portal was closed, while the short story Unbroken hints that the name was given to them by the draenei in Outland, long before they came to Azeroth, because it was believed that their minds had become "lost". Despite having devolved and being nicknamed "lost ones" they may still be referred to as draenei.[9][10] 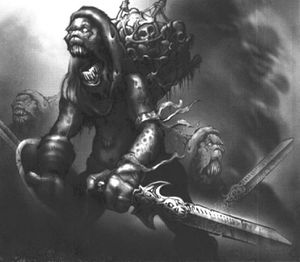 The draenei that originated on the world of Argus moved to the world they called Draenor and began living among the races of that world. The draenei lived alongside the orcs for several generations. However, when the orc clans of Draenor became the Horde at the behest of the Burning Legion, their blades were first whetted on the peaceful draenei. Nearly the entire race was eradicated by the massacre.

Soon after, the demonic energies that now seethed through Draenor began to corrupt and twist many of the surviving draenei, turning them into Broken and for some of them eventually into a more primitive stage known as the Lost Ones.

Before Draenor exploded and crumbled into what is now known as Outland, several Broken and Lost Ones managed to cross the Dark Portal toward Azeroth.

After the Portal closed down, regret and fear seized many of the Broken who had left their homeworld and were left weakened by the rigors of their journey. In their despair, they cursed the name of the Light and sank into violence and hatred, becoming little more than mindless monsters.[11]

Several groups of draenei, Broken and Lost Ones managed to survive the destruction of Draenor. While the draenei of Velen managed to hide at the monastery of Telredor, the Broken and Lost Ones were hunted down to the brink of extinction by the armies of Magtheridon, the Burning Legion overlord in Outland. Illidan Stormrage promised to rid the mutated draenei of their ancient enemies in exchange for their loyalty.[12]

The Broken exiles of Magtoor who had founded the Harborage within the Swamp of Sorrows were now in open conflict with the Lost Ones of the Fallow Sanctuary. Noboru and his gang were a terror to the Broken, wandering the swamps and killing any who crossed their path.[13]

Other Lost Ones like Kum'isha the Collector and his refugees had decided to stay in the Blasted Lands instead. Many of the Lost Ones were homesick and were in search of a rift that could bring them back on what remained of Draenor. The precious draenethyst shards were rumored to be able to open a rift, a feat that Kum'isha eventually managed with the help of adventurers when brought a

When the Dark Portal reopened, the armies of the Alliance and Horde traveled to Outland and saw that several Broken and Lost One tribes were now serving among the Illidari. Some Lost One tribes remain independent but became savage and hostile.

The draenei of the Alliance attempted to reconnect with the Feralfen Lost Ones in the Boha'mu Ruins,[14] but the Feralfen refused to re-assimilate with draenei society and seem to resent the draenei for neglecting them and patronizing them with offers of redemption.[15]

The remaining Lost Ones of the Fallow Sanctuary grow more corrupt by the day, and as they die off, they have begun to kidnap from the Harborage.[11]

Cersei Dusksinger had also been working on a weapon to one day use against the draenei. Part of her research included experimenting on the Lost Ones in the Swamp of Sorrows and tricking them into eating cursed livestock tainted by Fel-Tainted Morsels.[16] 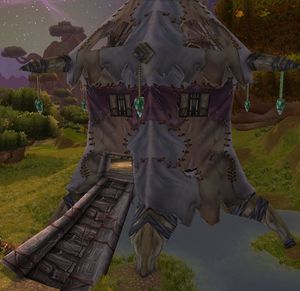 Larger Lost One hut in Outland, decorated with crystals.

The Lost Ones have become violent and unpredictable, even toward their own kind. However, some like Kum'isha the Collector and Elder Kuruti display a clear intelligence but still refuse to rejoin the draenei, due to bitterness to having been abandoned by them as Broken or their wish to maintain their own independence.

Like the Broken, the Lost Ones have forsaken the Holy Light practices they once had, and have instead started to use shamanism and even dark magic. As such, they are usually shunned by the rest of the draenei.

Draenethyst seems to be valued by them, as it seems that some of their larger leather huts in Outland are decorated with shards of it, and the Lost Ones in the Swamp of Sorrows were stealing some from the Harborage. 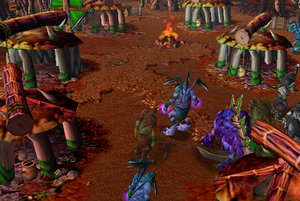 A Lost One village in Outland. 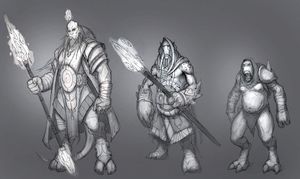 The devolution of a draenei into a Broken and further down into a Lost One.

The Lost Ones formed several groups, both on Azeroth and Outland:

Akama's tribe: (may all be Broken instead)

Though they are often thought of as further from their original draenei selves than the Broken, it is unsure if becoming a Lost One necessarily involves any more mental changes than those suffered by their less-devolved kin. Though there are very few sane or friendly Lost Ones, Elder Kuruti of the Feralfen tribe and Kum'isha the Collector show, if anything, less mental degradation than many Broken, who speak in a slow, clumsy manner with irregular pauses, often referring to their difficulty in remembering the past.

Several Lost Ones have rogue-styled abilities, something strange considering the class itself is unavailable to uncorrupted draenei. These Lost Ones could be former Rangari scouts.

Lost One Vindicators also appeared The Frozen Throne, though it is unknown if their names indicate that they are fallen draenei vindicators or if it is just a coincidence.