This article is about the group of devolved draenei simply known as the "Lost Ones". For the race, see Lost One.

The hostile Lost Ones who live in the Fallow Sanctuary are simply identified as the "Lost Ones". 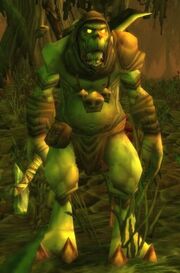 Before Draenor exploded and crumbled into what is now known as Outland, several Broken and Lost Ones managed to cross the Dark Portal toward Azeroth.

After the Portal closed down, regret and fear seized many of the Broken who had left their homeworld and were left weakened by the rigors of their journey. In their despair, they cursed the name of the Light and sank into violence and hatred, becoming little more than mindless monsters.[1]

These maddened Broken devolved into Lost Ones and split from Magtoor's Broken exiles.[2] Now they attack every race that approaches, even their former Broken brethren, under the command of Noboru the Cudgel, a vicious Lost One wandering the swamps with his gang.[3] The Lost Ones notably attacked a human caravan and only left only one survivor, Watcher Biggs, while stealing most the supplies.[4][5]

Another subject of dissension with the Broken are the draenethyst crystals, a sacred item to the Exiles of the Harborage.[2] The Lost Ones stole several of them, with Ongeku holding a shard himself.[6] Draenethyst was rumored to be able to open a portal back to their homeworld, and several of the Lost Ones were in search of a similar rift. 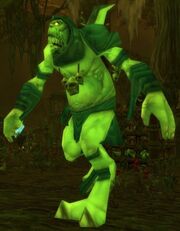 With the reopening of the Dark Portal and the arrival of the uncorrupted draenei to Azeroth, Anchorite Avuun came to the Broken exiles to aid them. He also wanted to learn all that he could from the Lost Ones. Cersei Dusksinger, on her side, established herself in Stonard, trying to perfect a horrible disease for use against the draenei. Seeing the Lost Ones as their backward cousins, she experimented on them by giving their caged animals

[Fel-Tainted Morsels],[7] furthermore cursing some of the fallen draenei. Anchorite Avuun, horrified, sent Alliance adventurers to put them out of their misery.[8]

The remaining Lost Ones of the Fallow Sanctuary grow more corrupt by the day, and as they die off, they have begun to kidnap from the Harborage.[1] Noboru the Cudgel and Ongeku are missing or dead, presumably leaving the control of the tribe into the hands of an unnamed chieftain.

The disappearance of any rift traveler among their ranks also indicates that, despite the reopening of the Dark Portal, they have lost sight of their original goal to find a way back home.

The Lost Ones feed themselves with meat from the area's monsters (crocolisks, jaguars and tarantulas).[7] Apparently they also eat humans.[9] They have seers and hunters in their ranks.

When Draenor exploded and became what is known as Outland, most of the draenei died. A few survivors managed to cross to Azeroth through the Dark Portal, when it was reopened by unknown cause after the events of the Invasion of Draenor.[10] These draenei called themselves the Lost Ones in mourning of their former world,[10][11] and established themselves in the Swamp of Sorrows.[10] Some have begun since to travel beyond the swamp's borders.[10]

They have managed to make a life for themselves in the Swamp of Sorrows, and struggle to reclaim their former lives.[10] The Lost Ones have managed to plant water-loving crops in the drier areas of the swamp and can feed themselves with those and with meat from the area's monsters.[12]

There are about 750 of them.[11] They were a peaceful race but would kill an orc whenever the opportunity arises,[10] to the point that they made plans to wipe out the orcs of Stonard.[12] When a shaman in Stonard used a spell that went wrong and attracted the swamp's monsters, as well as some of the demons wandering north of the Blasted Lands, the Lost Ones tried to take advantage of the situation.[13]

All of the Lost Ones living in the Blasted Lands (including Kum'isha the Collector, Akubar the Seer, the Portal Seekers, the Draenei Refugees and the Wretched Lost Ones) could have originally been a part of the group.

By the time of the start of the invasion of Outland, Thrall has encountered some lost ones on Azeroth.[14] It is very likely that they were of this group.