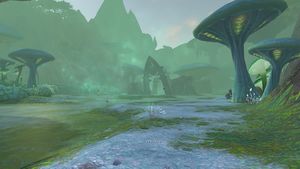 Lost Veil Anzu is an Apexis ruin located in the eastern portion of the Spires of Arak, along the coast and near the border with Shadowmoon Valley.

A small group of high arakkoa can be found around an excavation of a cavernous chamber near the coastal entry, and further on in the flooded Veil is a number of ogres under the effects of Amorphic Cognitors, mind-affecting parasites that greatly resemble merciless ones; beyond the ogres are a group of similarly-addled goblins who have set up a field of turrets, and in the very back of the Veil is a cavern filled with the Pale who are also under the effects of the parasites.

Swarms of the parasites can additionally be found floating off the ground, moving at high speeds. Repairing the goblin turrets or Apexis construct in the area will cause them to attack the parasites.

A noticeable amount of Zangar fungus is also present in the area.

It is possible that Lost Veil Anzu is connected to the Old Gods, due to the presence of merciless-like parasites and Pale orcs in the vicinity.