Lothraxion is the High Commander of the Grand Army of the Light, and serves High Exarch Turalyon and Lady Alleria Windrunner, who sent him to Azeroth in order to help protect it from the Burning Legion.[1] He is a nathrezim infused with the Light, and can be found at Sanctum of Light, the order hall of the Silver Hand.

Lothraxion is a unique instance of a nathrezim infused with the Holy Light. Before then, as a member of the Burning Legion, he hunted down creatures of the Void. It was during this time that he encountered Locus-Walker. Locus-Walker killed Lothraxion, but he did not kill him inside the Twisting Nether on purpose, allowing Lothraxion to regenerate. This is because Locus-Walker had seen a unique destiny for him.[2]

Lothraxion has since joined the Grand Army of the Light, an organization born from the survivors of worlds ravaged by the Legion and led by the naaru Xe'ra,[3] of which High Exarch Turalyon and Lady Alleria Windrunner are high-ranking members.[1][4]

Following the destruction of Draenor, Lothraxion journeyed to the shattered realm in order to recruit Turalyon and Alleria Windrunner into the Army of the Light.[5] Sometime later the Army of the Light raided a small Legion prison world only to discover all the demons permanently dead due to the void. During the raid Alleria would be attacked, infected with the void, and granted visions. In time she would become fascinated with the void and Lothraxion would reveal all that he knew of it to her. He would also reveal to her the existence of the Locus-Walker and conveyed their shared history to her. After learning that she believed that the shadow would be beneficial against the Legion Lothraxion warned her to not say such things where Xe'ra might hear.[6]

Lothraxion fought side by side with Turalyon on Argus and would later be attacked by an assassin seeking to claim Turalyon's life. During the battle against the assassin, Alleria (who had left the Army of the Light) returned and drove him off. Unable to stop the soulstone from draining Turalyon's soul Alleria used the Void to rip the assassin's poison out of Lothraxion, who saved Turalyon's soul and cleansed the poison from him in turn. After killing the assassin with the void Turalyon warned her to leave, as Xe'ra would not accept her use of the Void. However Alleria refused to leave and when the naaru arrived, she was ready to punish - even execute - Alleria for her actions. Turalyon and Lothraxion pled for mercy for Alleria, and Xe'ra was swayed by their words. Instead, Xe'ra would imprison Alleria, planning to keep her incarcerated until she renounced the void.[7] 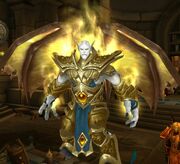 Lothraxion in the Sanctum of Light

Lothraxion was held captive on the Legion world of Niskara, where he was found and freed by the Highlord of the Silver Hand. Lothraxion, his name unknown to them at the time, informed the Highlord that the Legion planned to attack Netherlight Temple. He then left to get reinforcements.[8]

When Balnazzar attacked the Conclave of Netherlight Temple, the Knights of the Silver Hand arrived to aid them in its defense. As Balnazzar began to open countless portals to summon in more demons and finish them off, Lothraxion and reinforcements from the Army of the Light arrived and helped the Highlord and the High Priest to defeat Balnazzar.[4][9] Afterward, he traveled to Light's Hope Chapel in order to support the Order of the Silver Hand.

While his draenei comrades in the Army of the Light would go on to join the Alliance after the Legion's defeat, Lothraxion's allegiance remains unknown.

I am sure you have many questions, Highlord <name>. It was fate that our paths crossed that day on Niskara.
I serve High Exarch Turalyon and Lady Alleria Windrunner. When the Legion turned its armies toward Azeroth, I was sent here to help protect it.
How I got to Niskara is a tale for another time, but had it not been for you, I would still be Balnazzar's prisoner.
Now, I can fulfill my original mission. Let me fight for you. Together, we will drive back the Burning Legion![1]

Lothraxion appears as a legendary paladin card in the Madness at the Darkmoon Faire expansion for Hearthstone. His flavor text reads: "So infused with the Light, he has to wear double sleep masks at night."