Eavesdrop on the Thugs out behind the farmhouse at Furlbrow's Pumpkin Farm in Westfall. 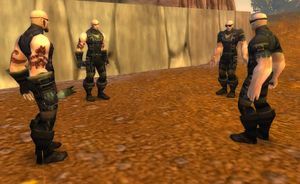 The thugs behind the building

A couple of thugs recently shows up at the farm, causin' all kinds of trouble. I don't know where they came from or who they're working for, but I KNOW they're bad news. I may have overheard 'em talkin' 'bout subjects that might interest you.

If you're interested, you'll find the thugs back behind the farmhouse. If you get caught or killed, I don't know you. Never seen ya!

We're dealing with an organization here, rookie. You don't just off the richest bum in Westfall in broad daylight and leave no witnesses. Someone with a lot of power is behind these murders. What have you learned so far?

Run behind the barn. It's necessary to round the corner to start the script event.

Thug 1 says: Did you... Did you meet her?
Thug 2 says: Yep. She's for real.
Thug 2 says: She wanted me to tell you lugs that she appreciates the job that we did for her on the Furlbrows. Gave me a pile o' gold to split with you all.
Thug 3 says: See her face? Is it really...
Thug 1 says: Whoa, what do we have here? Looks like we have ourselves an eavesdropper, boys.
Thug 1 says: Only one thing to do with a lousy, good-for-nothin eavesdropper.
Thug 1 says: DIE! 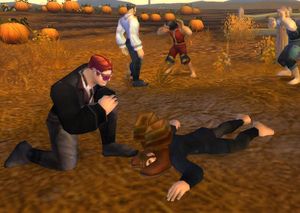 The four thugs turn hostile, but they only have ~70 HP each. Once all four are dead...

Two gunshots suddenly ring out and a woman screams!
Hurry back to the Furlbrow's Cottage!

Back up front, Laine's arrived and his investigators are yelling at three homeless Stormwind citizens because... Lou's dead!