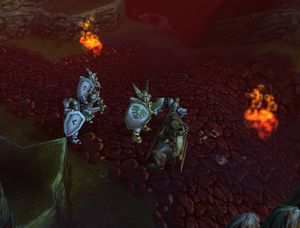 The confrontation in the depths of Karazhan.

For the dungeon, see Return to Karazhan.

Lower Karazhan is the fan name for a hidden "inverse" of Karazhan which begins at the lowest level and works its way downward, with Medivh's secret chambers lying at the very bottom. This reverse tower's layout is the same as the above-ground areas, but reversed, with the layout of the top floor of the normal tower being the same as the layout of the bottom floor in this tower and so on.[1]

Archmage Alvareaux wrote a treatise, proposing the existence of an exact copy of Karazhan in a world other than Azeroth and that both somehow share the same space, which might be a reference to lower Karazhan.

This area makes its first in-game appearance in Return to Karazhan after the Curator is defeated, accessed by a portal that appears at the end of his hallway. The bulk of Lower Karazhan seems to have deteriorated into the Nether, however the inverted version of the Guardian's Library is still intact, and these rooms are normally oriented. And although these rooms are intact, most of the passages between them are not. After the defeat of a malevolent shade of Medivh, adventurers stumble through one of the giant, unstable portals that have spawned in the inverted tower's ruins and when they arrive in a previous unexplored section of the library, they are shrunk to the side of ants. Here, at their diminutive size, they're forced to fight a mana wyrm which, to them, is giant in size. Upon its death, the adventurers are restored to their normal size.

This section of the Guardian's Library, the Guardian's Study, features a large model of Azeroth, surrounded by the same planets seen in Ulduar (perhaps the Pantheon themselves). It is here that the possessed Medivh was slain by Anduin Lothar and Khadgar, and a memory of part of this event plays out in front of adventurers. Like its counterpart, the inverted Guardian's Library connects to an inverted Gamesman's Hall which, unlike the library, has nearly disintegrated entirely. Past here is Lower Karazhan's own connection to Netherspace where Viz'aduum the Watcher commands the tower's invasion.