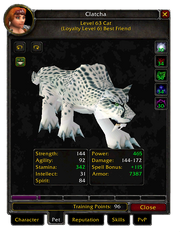 Loyalty as was shown in the Pet tab

Loyalty was a property of a Hunter pet. It determined if the pet would stay with you or run off. Loyalty gain or loss was determined by the pet's Happiness. Raising the loyalty level would have been your first concern after taming a new pet.

The pet's loyalty was shown in the Pet tab of the Character Info window.

When you first tamed a pet, its Loyalty index was at the lowest level. If you immediately fed it, this would raise happiness which, in time, would help to raise the pet's loyalty index. The player had to keep in mind that loyalty was directly tied to happiness. You could not neglect one without the other trait suffering.

There were several stages of Loyalty:

Rebellious (Rank 1)
During this stage, your pet's happiness fluctuated a great deal. If the pet or yourself were constantly dying, or if you dismissed the pet too often, he could begin to become very hard to handle and might have left you.
Unruly (Rank 2)
You had begun to show the pet who the Alpha is but you still hadn't totally convinced him. You needed to keep feeding and treating the pet well.
Submissive (Rank 3)
You won the pet over to some degree and it was ready to work harder at becoming your faithful companion. Feeding became a little less strenuous at this point, requiring less food to keep the pet happy.
Dependable (Rank 4)
That's it, you were the boss unless you messed up by letting the food bowl stay empty too long. The pet had fully accepted you as its master and things were good. Your pet required less food to remain happy.
Faithful (Rank 5)
It would have been extremely hard at this point to run the pet off except by a concerted plan of neglect and abuse.
Best Friend (Rank 6)
Ahhh, isn't he cute? Your pet was now a furry rug at your feet when you settle down in front of the fireplace with a glass of wine and a good book. At this loyalty level your pet required the least food to remain happy.

At this stage of the pet keeping game, you would really have had to work hard to get rid of your pet. Only by letting its happiness rating fall to unacceptable levels and remain there for an extended amount of time could you undo all the trust and faith your pet now had in you.

To gain loyalty required both xp gained and time spent. The following table was found by Mania's Arcania. Basically, to gain a loyalty level, your pet needed to, no matter what, gain at least 5% of the XP you, the Hunter, needed for your next level. This was required even if your pet was your level (which means they weren't actually gaining the XP). But there was also a time component on every loyalty level past Unruly. For example, to get to level 4 from level 5, you not only needed the experience gain, but an hour had to pass. This, as Mania says, is why sometimes your pet would ding loyalty while you're standing around in town-- you had gained the experience, but the time had to pass as well.

With Patch Version 3.02, hunter pet loyalty has been completely removed. Happiness however remained. All pets start out with an amount of skill points, which depends on the level of the pet, not on loyalty and level as before.