Lucifron is one of the four flamewaker captains of Ragnaros, and the first boss of Molten Core.

Among the ranks of the flamewakers, overseers and their guards constantly jockey for higher status among the hierarchy of elementals in hopes of gaining favor with Ragnaros. Lucifron is no exception. He has clashed with Gehennas on several occasions, particularly during their incarceration within the Elemental Plane. This rivalry has now extended to the Molten Core where Lucifron quietly waits for his opportunity to capitalize on any weakness shown by the other flamewakers.[1] Lucifron, and his two Flamewaker Protector guards, can be found watching over the enormous core hound Magmadar, favored pet of Ragnaros.

It is however still possible to kill Magmadar without alerting - and thus not killing - Lucifron.[2] Also, as he for some reason doesn't guard any runes, it's also possible to summon Majordomo Executus without killing Lucifron.[3]

Lucifron's Curse
Curses nearby enemies, increasing the costs of their spells and abilities by 100% for 5 min. This cost increase applies to all spells and abilities, whether they cost mana, rage, energy, runes, or runic power.
Dispel Type: Curse
School: Shadow
Radius: 40 yards 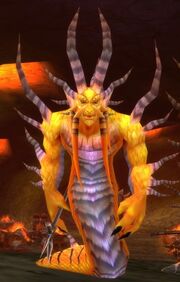 Inflicts normal damage to an enemy and its nearest allies, affecting up to 5 targets.
School: Physical

In most cases, raids will first dispatch the first Core Hound Pack to give some room for the pullers and the main tank. It is important when Lucifron is pulled that he not come near the main raid group or there could be an instantaneous wipe. His guards have the ability to mind control, so it is sometimes easier to have one or two dummies move ahead of the main tank to suck up the mind control. Additionally, no one can move near the tunnel to the west, or the imps and surgers inside could chain aggro and wipe the raid.

Generally, two hunters will use one of their insta-cast shots to pull the Flamewalker Protectors, while the Main Tank must run up, tag, and pull Lucifron in the opposite direction of his guards. Generally the back cove is where the guards are pulled, while Lucifron is taken to another alcove on the east, far from the main raid. Each of the guards must then be picked up by two offtanks and dispatched accordingly before Lucifron is targeted.

Mages will not be contributing any large part of the DPS in this fight as they will be tied up with removing the curse that Lucifron casts on the raid every 15 seconds. Priests and Paladins will also be tied up dispelling the Impending Doom debuff from healers, and especially the main tanks, and whoever becomes mind controlled. The core DPS for this fight therefore falls upon the rogues, hunters, and warlocks.

Once the two guards are defeated, all DPS will shift over to Lucifron. Usually around 20-25%, it is safe for some of the mages to begin casting their nukes, depending on their mana and how quickly they decurse the raid.

Lucifron's debuffs have a range of 40 yards. It is possible for every healer (except the MT-decurser), and properly spec'ed hunters to stay out of Lucifron's curse-range, so with a good group you can minimize every curse-wave to about 10 raid members (melees). This makes the fight much easier and allows the mages to do damage too. You can also choose to keep only necessary players within the radius (healers, decursers, dispellers, tanks), and hold back the DPS players out of the range until Luci's mana is depleted. It takes a few minutes, but it saves the trouble of nearly wiping when the entire raid is bing hit by the curses and magic effects. Its good to note that any ranged DPS that can attack at 41 yards through talents can exceed Luci's range and still DPS him down. They just have to be at their maximum range.

If Lucifron is not defeated before the group wipes, the guards will respawn.

Lucifron drops two epic items, which may include one of the Tier 1 epic boots or gloves for some classes.