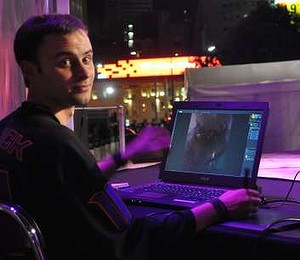 Luke "Mr. Jack" Mancini is a Concept Artist at Blizzard Entertainment.[1][2][3] He is also a member of the Sons of the Storm.[4]

Mancini studied at Monash University in Melbourne, Australia. He studied design, but drew videogame fanart in his spare time. Although he drew for a variety of subjects, StarCraft was his favorite setting, and he especially enjoyed drawing for the zerg. However, his fanart, which he posted online, caught the art team's attention, and seeing that Mancini had already applied, got in contact. He accepted a job offer and moved to California. He has worked there ever since.

SonsOfTheStorm.com Profile on Sons of the Storm

SonsOfTheStorm.com Art Gallery on Sons of the Storm
Retrieved from "https://wow.gamepedia.com/index.php?title=Luke_Mancini&oldid=4717557"
Category: