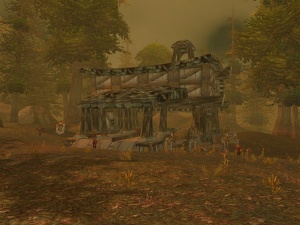 This is where the raw wood supplied by peasant harvesters was made into building supplies, arrows, and catapults. The ability to craft wood to the specific shapes and sizes needed to make certain buildings made them an essential part of any community. The mill could also provide Archers with better shafts for their arrows that would make them fly truer, and increase the amount of damage that they inflicted.[1]

This is where the roughly cut wood supplied by the peon laborers was made usable by skilled workers for buildings, spears, and catapults. If other orcs required specific woods for their sites, only the lumber mill had the necessary workers to complete the task. When funds were directed to the craftsmen of the mill, they could increase the quality of spears, making them bite even deeper into the hide of the Human scum.[2]

Seeking insight into the mysteries of the great Ironwood trees of Northeron, the elves of Quel'Thalas constructed lumber mills where they became exceptional craftsmen. The elves offered their superior skills in service to the Alliance, providing more efficient means for processing lumber. The production of ships and war machines became possible with the addition of these structures.

Lumber mills were also responsible for producing the perfectly crafted arrows that made the elven archers feared throughout the Horde. When given the necessary resources, Elven craftsmen would upgrade the quality of these arrows, thus increasing the possible damage that could be inflicted. Elven rangers, after being trained at the barracks, had been known to gather at the mills, honing their skills in Longbow, Marksmanship and Scouting.[3]

Carved from the husk of an ancient Ironwood tree, the Troll Lumber Mill was a vital part of the Horde's lumber processing operation. The Trolls, having lived in the forests of the far north for centuries, had devised a unique method of harvesting. By treating a group of trees with a volatile alchemical solvent, the Trolls could deaden and weaken large sections of wood. Though it was extremely hazardous to Peon and earth alike, this site made the process of cutting lumber more efficient. Trolls had become quite adept at fashioning a special sort of throwing axe. The crafting and use of this weapon were always being honed to perfection. Troll Berserkers frequented the Ironwood trees to digest potions given to them by the Goblin Alchemists stationed there. These potions enabled them to throw their axes greater distances or sharpen their sight. It was also said that the speed at which healing occurs was increased if the correct potion was ingested. This process of regeneration was one of the most distinct and unbelievable powers of the Troll Berserkers.[4]

The master masons of the human lumber mills strive constantly to improve structural integrity. The site is also a processing mill for lumber harvested from the surrounding landscape. The wood harvested is used in everything from raw building materials to weapon handles.

The Lumber Mill helped the high elves to fend off Arthas and the Scourge as he tried to attack their capital city of Silvermoon and Quel'Thalas in Warcraft III: Reign of Chaos by serving as a returning point for lumber. However, the Lumber Mill couldn't be built by the High elf worker unit likely due to the limited ability of the map editor prior to the Warcraft III: The Frozen Throne expansion. With the addition of The Frozen Throne expansion's map editor, it is possible to make additional groups with building orders.

The lumber mill also helped the blood elves and Kael'thas Sunstrider during the Curse of the Blood Elves campaign in The Frozen Throne.

An invention of the crafty trolls, this structure maximizes potential by serving as a mill for lumber as well as a forge for weapons smithing. Here weapons and armor are tirelessly reworked for maximum efficiency. Trolls here can also create one of their most useful fortifications: spiked barricades.[5]

Lumber mills can be found all throughout Azeroth, Outland and Draenor, and even in battlegrounds such as Arathi Basin. While a few lumber mills have been abandoned or destroyed, some still remain intact. Many sites in World of Warcraft are lumber or logging camps even though they lack a true "lumber mill" building as they were in the former strategy games. An example for such a place would the Warsong Lumber Camp in Ashenvale.

In the Great Sea and South Seas

The Woodsmen that previously lived at Quel'Lithien Lodge might have been some of the sylvan craftsmen mentioned to operate elven lumber mills.[6]