The Lunar Festival is a time of celebration. The people of Azeroth celebrate their triumph of many thousands of years ago, when an alliance of good races (the night elves, tauren, furbolgs, and earthen) defeated a terrible evil called the Burning Legion. It is also a time of remembrance for the valor and wisdom of that ancient age.

Today, the Lunar Festival is held by the druids of Nighthaven. Both the Horde and Alliance are welcome to celebrate and shoot fireworks — a symbol of Elune's power. Ancient heroes of the past also appear throughout the land, offering gifts to those who find and honor them.

It is a time of happiness, fortune and celebration, but it has a deeper motive as well.

Omen, defeated so many centuries ago, yet remains in Lake Elune'ara. Although driven insane by the Burning Legion, the demigod still possesses Elune's blessing and thus is immortal. During the Lunar Festival, he stirs...and heroes of the land are called to defeat him once again.

For a list of Elder locations and a guide to visiting them all, see Lunar Festival Elders.

Note: Learning one firework will learn the other automatically.

Only one pet is visible to individual players, but both factions' pets are not soulbound and can be traded or sold on the auction house.

Most of the achievements in the table below are required for the meta-achievement,

[To Honor One's Elders], which is itself required for What a Long, Strange Trip It's Been.

Decorations are placed in every capital as well as in the regions of Nighthaven and Moonglade. Revelers celebrating the Lunar New Year will be spread throughout the world (the revelers are concentrated in Moonglade, except for those that show up for the fireworks shows in Stormwind/Thunder Bluff/Booty Bay); the lunar festival specific NPCs can be found in each capital and in Moonglade. There are also other NPCs — spread throughout the world — that are ghost-like elders who players must find and honor, as noted below.

Lunar Festival events focus on the celebration of the inhabitants of Azeroth's ancestors. Quests can be found throughout the world offering holiday-related items such as fireworks and other memorabilia to celebrate one's elders and ancestors. Elder Ghosts are found throughout the world of Azeroth and each time players finds a new Elder, they receive a token that can be redeemed for special holiday-related items.

It appears that Blizzard moves the dates of this event to conform to the real-life Chinese Lunar New Year on which this festival is based.[1]

Some holiday items that relate to the Chinese New Year include:

At Nighthaven, Valadar Starsong and Fariel Starsong sell items in exchange for

[Coin of Ancestry]. 84 coins can be acquired per-character each year:

Required Skill: required only for use, not for purchase.

Finally, there is Omen, a high-level boss that spawns in Moonglade during the festival, giving players a chance to experience a raid-style encounter that only appears during this time of year. Omen is inspired by the tale of "Nian" from Chinese lore. In the Chinese version of WoW, Omen's name is left as Nian.

Simple quests exist at each major city that provide a 24-hour invitation that allows the bearer to teleport to Moonglade from inside a nearby circle of moonlight. Once in Moonglade, one hill contains a number of similar circles of moonlight, each of which lets a character teleport back (using the invitation) to one of the cities. Though the invitation has a 10-minute cooldown, this provides a convenient way to move from city to city for the duration of the festival (see the Travel Guide). In addition, this provides a flight point to Moonglade, usually accessible only to Druids and high-level characters.

Even if you completed these quests (including the veneration of the elders quests) in a previous year, they will once again be available to you this year.

You don't need a prerequisite for these. Just find the Elder, talk to them, and the quest is complete. There are 84 elders in all. The Elders stand in circles of light, and give you tips as to where to find the other nearby Elders. You can complete the quest with any Elder, though some are harder to get to than others, such as those in your opposing faction's capital cities.

All of these quests give 1

[Coin of Ancestry] and 75 (changed from 50) of your faction's reputation. (No Cenarion reputation.) As of 2011, you will gain reputaion with a faction city up to Honored. This means +75 to each of your faction's cities that you have not reached Honored with. If you finished these quests in 2006 you weren't able to repeat them in 2007, but as of 2008 you can complete the quests for Elders you finished in previous years (in other words, the 2008 and 2009 festivals ignore which ones you completed in previous festivals).

Upon completing the elder's quest, the elder also hands the player a

[Lucky Red Envelope], which alternately contains either an

[Elder's Moonstone] (summons a circle of light, same as

[Lucky Rocket Cluster], which gives you and anyone near you a +250 health buff for 30 minutes, when thrown into a

[Cluster Launcher]. The odds of either appear to be about even.

A complete list of all the Elder locations including coordinates can be found on the Lunar Festival Elders page.

During the Lunar Festival, two vendors in Moonglade will redeem Coins of Ancestry for goods:

See the NPCs' pages for a list of the items each sells. All of these items are Bind on Pickup (except

[Elune's Candle], which is sold for silver, not Coins of Ancestry.)

An engineer who wants all the fireworks schematics will need thirty Coins of Ancestry.

A tailor who wants both red festival clothes patterns will need ten Coins of Ancestry.

In 2012, two faction-specific companions were released, the

[Lunar Lantern] for the Alliance and

[Festival Lantern] for the Horde.

The coins don't have a limited duration, so you can save your excess for the next festival. 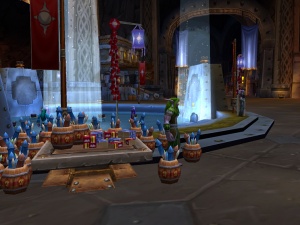 Every year the druids of Moonglade hold a celebration of their city's great triumph over an ancient evil. During the Lunar Festival, citizens of Azeroth have the opportunity to honor their elders by celebrating their sage wisdom, sharing in magnificent feasts, and of course...shooting fireworks! 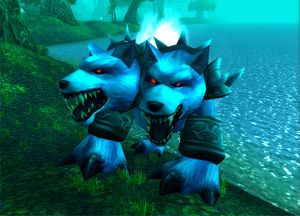 The beast of Omen was once a hero of this world. A wolf of great strength and fortune, Omen fought beside the heroes of the War of the Ancients until he succumbed to demonic magics. Turning against his allies, he raged across Azeroth and carried death and terror in his wake. Finally defeated in Moonglade, Omen now sleeps among the silt of Lake Elune'ara. But each new year, during the festival, he stirs... 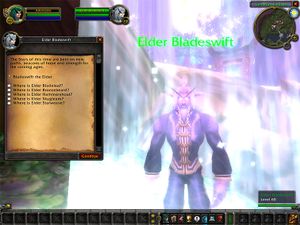 During the Lunar Festival, adventurers will have the opportunity to honor many of their elders, and by doing so, they will also honor their culture and their people. For this, the Coins of Ancestry serve as a tangible means to recognize those who have chosen the venerable path of respect. Those who are recognized thus will have their diligence rewarded with a selection of unique items. 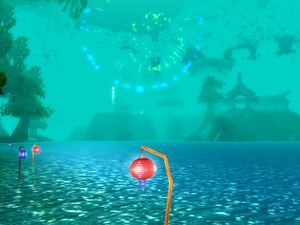 The innovative and artistic engineers of Undermine have been slaving away since their display of pyrotechnics in July. Their latest and greatest - not to mention highly dangerous to operate - creations will be on display in the cities of the world every hour after sunset. Keep your eyes to the skies, and be sure to stick around for the finale! 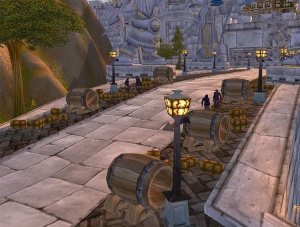 Many soldiers formerly abroad have come home to engage in the festivities. Share in the merriment and dance with the revelers, or, if you're so inclined, blow a kiss to one that catches your eye. It's all in fun, after all; they appreciate the attention!

Festival Outfits To help celebrate the festivities, a selection of unique clothing become available to adventurers. Such outfits have been worn in times past during the Lunar Festival and each is hand-crafted with only the finest soft fabrics and other quality components.

The Lunar Festival is a time of celebration. The peoples of Azeroth celebrate their triumph of many thousands of years ago, when an alliance of good races (Night Elves, Tauren, and Earthen - a proto-dwarven race) defeated a terrible evil. It is also a time of remembrance for the valor and wisdom of that ancient age.

The demi-god Omen was a being of great strength and knowledge. Blessed by Elune, Omen wandered primordial Kalimdor, guiding hunters and gatherers and offering luck and advice to all he met. When the Burning Legion launched their attack, Omen allied with Azeroth's defenders. He fought bravely but after many battles his wounds from demonic forces plunged Omen into a deep, dreaming sleep...where fel-inspired nightmares slowly consumed him. When he finally awoke, centuries later, he had fallen to madness.

The transformed Omen rampaged. No longer a creature of wisdom - but still possessing the strength of Elune's blessing - he tore through the land, killing and devouring. Terror rode before him, and death trailed in his wake.

Omen's spree of horror ended when a coterie of ancient heroes gathered in the village of Nighthaven and faced the beast. They called down the moon's wrath and Omen, blinded and stunned by the power of the moon goddess, fled into the deep waters of Lake Elune'ara. That day marked the end of his rampage, and symbolized a new beginning for the people of Azeroth and the followers of Elune.

Today, the Lunar Festival is held by the druids of Nighthaven. Both the Horde and Alliance are welcomed to celebrate and shoot fireworks - a symbol of Elune's power. Ancient heroes of the past also appear throughout the land, offering gifts to those who find and honor them.

It is a time of happiness and fortune and celebration, but it has a deeper motive as well...

Omen, defeated so many centuries ago, yet remains in Lake Elune'ara. Although driven insane by the Burning Legion, the demi-god still possesses Elune's blessing and is, hence, immortal. During the Lunar Festival, he stirs...and heroes of the land are called to defeat him once again.