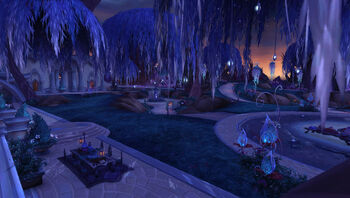 The Lunastre Estate is a large residential estate and mansion owned by the aristocratic House Lunastre, and located in the southwest of the nightborne city of Suramar. The estate itself can be found on the city's upper levels, sitting on the very edge of its limits. The compound is quite vast, with extensive gardens, pathways, a mansion, and a panoramic view of the city. The estate is owned by Lady Ly'leth Lunastre, the current head of her family.

Owned by one of the more powerful families within nightborne society, the Lunastre Estate is a location of some relative importance and a site of great intrigue for the larger political landscape of the region.

Masquerade parties are regularly held on the estate, which are notorious for the amount of gossip and rumor dealing that occurs during these events.[1] In recent times, with the outbreak of the Nightfallen rebellion, it has become something of a secret base of operations for the rebels, whom Lady Lunastre herself is secretly aligned with. 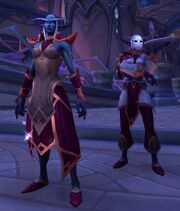 House Lunastre has been a noble house among the nightborne for generations. Though they belong to the powerful aristocracy, the Lunastres do not reside in the eastern portion of the city as is typical of their class, instead basing their estate and residence in the city's far west. This tendency was begun at least as early as the stewardship of Ran'thos Lunastre and is currently upheld by his eldest child Ly'leth, who finds the haughty attitudes of the other nobles disagreeable.[2]

At the time of the third invasion of the Burning Legion, civil war would erupt among the nightborne people, with the Nightfallen rebel faction led by First Arcanist Thalyssra seeking to oust the regime of Grand Magistrix Elisande and her demon allies. Initially, the rebels sought to secure allies within Suramar City itself to aid in their fight, focusing on those sympathetic to their ideals. Before long, Nightfallen agents would make contact with Ly'leth Lunastre on her estate.

Ly'leth, disillusioned with Elisande's decisions and believing it to be in keeping with the memory of her late father, pledged the full support of herself and her house to the rebel cause, though she hid this new association publicly. During the course of the conflict, the Lunastre Estate would thus serve as a major base and staging point for the insurrection, and even hosted a direct connection to the main rebel base at Shal'Aran via a telemancy beacon.

The Lunastre Estate was spared the destruction wrought on the majority of the city as the civil war progressed, mainly due to its peripheral location. When Ly'leth's true allegiance was eventually discovered by Elisande, she was detained within the Nighthold; assassins were sent to the estate to deal with potential accomplices, though the compound itself remained unharmed. First Arcanist Thalyssra herself even used the estate as a secure location to meet when she briefly dared to enter the city later in the conflict.[3]