From Wowpedia
(Redirected from Ly'leth)
Jump to: navigation, search

Ly'leth Lunastre is a prominent nightborne noblewoman residing within the nightborne capital city of Suramar. As matron of the aristocratic and powerful House Lunastre, Ly'leth holds great influence among her people. During the Nightfallen insurrection that raged through Suramar, she was a secret member of the rebellion, and used her potent cunning and influence to guide the insurgents' efforts within the city.

Ly'leth herself resides in the Lunastre Estate in Suramar City. A socialite, she was well known for throwing lavish masquerade parties and dealing profusely in gossip and rumor-mongering. Despite her background in the nobility, she generally avoided political matters, though this did not stop her seeking election as advisor to Grand Magistrix Elisande during the civil war in order to act as a spy for the rebellion.

Where First Arcanist Thalyssra leads from outside the city in the nightfallen state, Ly'leth Lunastre is the other brave and tenacious nightborne noble that operates the resistance cell from within Suramar City right under the noses of the Legion and its lackeys. Here she calls on champions sent by Thalyssra to assist her in their efforts to stir the once noble shal'dorei to action against the tyranny of Grand Magistrix Elisande and the destructive occupation of the Legion.

Ly'leth is cunning and brave, and seizes any significant opportunity when it arises in an attempt to aid the resistance from within Elisande's inner circle. She remembers that the Nightborne are both noble and brave and seeks to remind those under oppression of their ancient night elven heritage of standing defiantly against the Legion.

Despite their House and rank, House Lunastre intentionally chose to live on the other side of the city, away from the majority of their peers in the nobility. Ly'leth continues to do so after her father's death as she finds the nobles' general attitude distasteful. While this is not the case for every noble house, it highlights Ly'leth's true nobility.

Ly'leth sees herself as continuing the legacy of her late father Ran'thos, in contrast to her sibling Anarys, who is loyal to Elisande. The divide between the two is great: Anarys sees Ly'leth as a traitor who endangers everything her father worked for, while Ly'leth believes Anarys does not realize what he truly died for.[4] 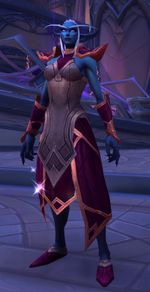 Ly'leth Lunastre lived as a member of House Lunastre and the nightborne aristocracy prior to the end of Suramar's 10,000 year-long isolation following the War of the Ancients. Daughter of Ran'thos and sister to Anarys, Ly'leth was a well known socialite among the ruling class, often organizing large parties and remaining a fashionable member of the nobility,[5] though she did not share their often haughty and arrogant attitudes.

When the demonic Burning Legion began their third invasion of Azeroth, the leader of Suramar City and the nightborne people, Grand Magistrix Elisande, chose to make an alliance with the demons to preserve her nation. Though an attempt was made to depose Elisande in a coup led by First Arcanist Thalyssra occurred, it would ultimately fail, with Thalyssra barely escaping the city with her life.[6]

While many nightborne supported the Grand Magistrix and her decision (especially within the nobility), many others felt she had made a terrible mistake. Lady Ly'leth, now head of House Lunastre, stood firmly albeit not openly against Elisande's demonic pact when it was made, viewing the Legion as a major threat to the nightborne civilization. Ly'leth also held no love for Elisande herself, in whose service her father had recently died under questionable circumstances.[7] Despite these misgivings, Ly'leth was powerless to act following the failed coup and the demons' occupation.

When First Arcanist Thalyssra began a fledgling resistance faction from the ruins of Shal'Aran outside the city, she sent a trusted ally to meet with Silgryn, a spell-fencer, in Suramar City with the goal of finding more sympathizers within the city. Silgryn would ultimately arrange for Thalyssra's agent to make contact with Ly'leth during one of her masquerade parties. Upon their first meeting, Ly'leth was engaged in a heated argument with her sibling Anarys, who remained steadfastly loyal to Elisande. With her new ally's help, Ly'leth was able to detain her sibling, after which she crafted an illusion spell that disguised the adventurer as Anarys, allowing them to traverse the city in disguise while also not alerting anyone to the real Anarys's disappearance.[8][9]

Ly'leth subsequently proved to be a vital ally to the Nightfallen resistance, using her family's formidable connections and influence to oversee many of their most important operations throughout Suramar City, though she took great care to keep this association a secret. She would aid the resistance in organizing covert the distribution of arcwine among the starving citizens of the poorer districts, by helping them make contact with the merchant Vanthir in the Waning Crescent,[10] and later the vintner Margaux in the Twilight Vineyards.[11]

During the ensuing Nightfallen rebellion, Ly'leth would also be the one to mastermind an infiltration of the Court of Stars with the goal of assassinating the Grand Magistrix during a ball; she herself provided the transport for the rebel agents by boat. Though the plot failed to kill Elisande herself, it did result in the deaths of a number of key supporters, most notably Advisor Melandrus.[12] 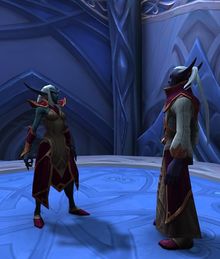 Though a member of a very prominent noble family, Ly'leth had shown little interest in political maneuvering throughout her life.[13] Despite this, she agreed to run for a newly-available position on Elisande's inner council, and in this capacity provide vital information to the rebellion. She quickly set about securing the support of the other nightborne noble houses with the aid of an agent of Thalyssra. Although a close ally of Ly'leth and House Lunastre, Lady Aurore of House Astravar found herself and her family intimidated by Coryn Stelleris, who also sought the position of advisor. Ly'leth's agents would ultimately rescue Ailen Astravar from his Stelleris captors, and in doing so win Aurore's vote.[14]

At the same time, Ly'leth also carried out a plot to have the rival nobleman Ruven Duskmere killed, while framing his murder on Coryn Stelleris. The scheme was a great success, effectively turning House Duskmere and House Stelleris against one another.[15][16] Following this, Ly'leth found herself with the required support to win her bid. She attended the ceremony bestowing the title in the Sanctum of Order, with Grand Magistrix Elisande herself present. In the middle of the event, however, Coryn Stelleris suddenly confronted Ly'leth, accusing her of treachery and challenging her to Tal'ashar, an honour duel to the death.

Ly'leth would nominate her champion to fight in her place, and they would ultimately emerge victorious against Coryn atop the Sanctum of Order. With her position now secured, Ly'leth ascended to her new rank of magisterial advisor, and was relocated to the Nighthold.[17]

Ly'leth continued to direct resistance operations within the city in secret, especially those throughout the Noble District aimed at the felborne and loyalist aristocrats.[18] She also ordered the assassination of several loyalist lieutenants to consolidate the power of the Nightfallen position within the city.[19] 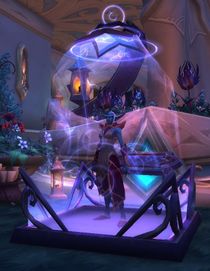 Now in a high-ranking position within the palace, Ly'leth quickly began to relay sensitive information to the Nightfallen leaders in Shal'Aran, using a magical image of herself to deliver the messages. When Vanthir goes missing after the massacre at the Waning Crescent, it is Ly'leth who managed to find a lead on him and requested Thalyssra to meet her at her estate immediately. There, she conveyed the dire news that Vanthir was set to be made an example of to the populace, and the rebels quickly moved to rescue him.[20][21]

After weeks of sending regular updates to Shal'Aran, the rebels abruptly lost contact with Ly'leth. Unbeknownst to them, the Duskwatch had established a secretive specialized scrying post on the Terrace of Enlightenment, from which they could monitor and intercept magical messages being sent from the Nighthold. Ly'leth's subsequent messages never got through, though they contained an important warning: Elisande and Andaris Narassin (the new First Arcanist) had been working on a new time spell that threatened to stop the Nightfallen invasion in its tracks. Now aware of her treachery, the Grand Magistrix's forces seized and imprisoned Ly'leth deep within the palace.[22]

After the rebels' march on the Nighthold was halted by Elisande's time spell, Thalyssra and her allies sought answers by attempting to find Ly'leth's missing messages. They quickly discovered and raided the Duskwatch listening post, and learned what she had intended to convey. Though Ly'leth's warning came too late, she did provide vital information on an alternate entrance to the Nighthold underneath the Sanctum of Order. With this knowledge, the rebels immediately went about infiltrating the palace less via this new opening.

As the Nightfallen champions began their second attack on the Nighthold, Ly'leth remained in a cage near the Captain's Quarters in the upper reaches. Though she spitefully insisted to her jailer, Spellblade Aluriel, that her allies would soon rescue her, the latter merely laughed in Ly'leth's face. The champions would, however, succeed in defeating Aluriel as they battled further through the palace, and eventually liberated Ly'leth herself from her prison. She then rejoined the other rebel leaders gathering in the main plaza in preparation before the final push to secure the Nighthold.

After Elisande's demise and the defeat of the Burning Legion in Suramar, Ly'leth and the other Nightfallen relocated to the Nighthold to establish a new regime over the city. Under Thalyssra's leadership, the nightborne would go on to join the Horde following the Legion's final defeat in the Argus Campaign. Ly'leth would remain in the Nighthold and meet new nightborne champions preparing to venture out into the world for the first time.

[110] Lady Lunastre at Concourse of Destiny

Signal lantern used
Your arrival is fortuitous. Tonight, the nobles have gathered in honor of the Grand Magistrix.
Our spies report that Elisande herself will attend. This presents a rare opportunity to catch her away from her source of power.
We'll take a side entrance to the grounds... too many eyes are watching the front.
This is your best chance to eliminate the Grand Magistrix. Good luck!

Approaching Moonlight Landing
It seems the Nightwatch are charged with keeping order during the party. Might I suggest the hidden approach?
Along the way, you'll want to disable their arcane beacons and keep the sentries from raising the alarm.

Approaching Midnight Court
Watch out up here, I've heard tell of a demonic council that draws strength from one another. This bond must be broken.
Explore the area and find a way to separate the council members. Divided, they cannot stand against you!

After Talixae Flamewreath is killed
You've done well so far, but we must ensure you blend in at the party. I'll enhance your disguise, infusing it with latent magic to make you appear as one of our nobles.
It should fool the gibbering wine soaked guests, but a keen eye could see through it. Should the illusion falter, the guards will quickly descend upon you.
My informants claim that a Burning Legion spy is attending this party.
Speaking with chatty nobles may reveal the spy. Just avoid drawing attention to yourself with wild accusations!

Spy foiled
Excellent! Now that we have the key, the way to the balcony should be open. It's time to put an end to Elisande!

After Advisor Melandrus is killed
We may have missed our chance at the Grand Magistrix tonight, but her time will come. Sooner or later we'll find another way to settle the score...

I cannot stay for very long- I am expected back at the palace. We must be quick.

After being freed
Ah, free at last! Thank you, Outlander.
I told Aluriel you would come to rescue me and she merely laughed. Well who is laughing now?