Not to be confused with Dark Ranger Lyana.

Lyana Darksorrow is a night elf demon hunter member of the Illidari. She appeared in various places on Mardum and also briefly in Dalaran, accompanying Kayn Sunfury. One of her glaives resonates with a dark, hateful energy[1] while the other, cold to the touch, thirsts for the blood of demons.[2]

It seemed she was killed in Suramar in attempting to retrieve the Twinblades of the Deceiver from Varedis Felsoul. However, she was later found in captivity in Felsoul Hold, her soul being drained into a fel crystal.

The fel harvester had taken much of her strength, but she would regain the full extent of her powers shortly. After being freed by an order hall leader, Lyana said she was there on a mission to slay the demon eredar Azoran. Unfortunately, as she was flying over the northern side of Felsoul Hold's crater during her infiltration, she was shot down from her felbat and captured.[3] It seems she was merely accompanying a demon hunter in their hunt for Varedis, while she had her own task to do. 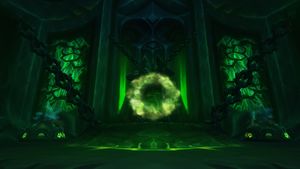 The portal to the Lightbreaker and the key shards on each side.

She revealed that Azoran planned to use the Legion command ship in Felsoul Hold known as the Lightbreaker to destroy Dalaran. To stop him, she needed her warglaives that were lost during her fall from the sky. Weakened from her imprisonment, she asked the order leader to retrieve them for her. She also asked them to gather fresh fel-infused flesh from felfire basilisks nearby.

The order hall leader was then asked to place the fel flesh at Grimwing the Devourer's altar. Grimwing was a formidable demon and the strongest of the felbats of Felsoul Hold. Once slain, the order leader brought her head to Lyana, who was forcefully interrogating a wyrmtongue servant of Azoran.[4] The demon had information that would lead to those in charge, however he was much more afraid of his master than he was of Lyana. As such, she asked the order leader to retrieve Legion emblems, that the most powerful Legion soldiers always carry, in order to show them to the wyrmtongue to scare him.[5] The order leader was also asked to free from their cages those that the Legion would sacrifice to power their soul engines.[6] 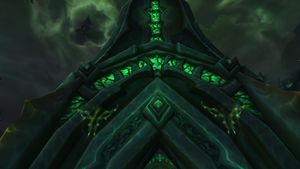 Before the proof of his powerful kin's demise, the wyrmtongue revealed that there was a portal leading to the Lightbreaker. However, it was locked to those without the keys. The first key shard was held by the ered'ruin known as Vorgos, residing within the Fel Breach at the end of the Arcway. The other half of the key was held by Kozak the Afflictor, a demon jailer who could be found in the prison quarters known as the Halls of the Eclipse in the lower portion of Felsoul Hold.[7]

The shards retrieved, they were locked into position next to the deactivated portal. Swirling fel energy collected around the shards, filling the room with an ominous, dark presence. The dark writhing of fel energy surrounded the order leader as it collected near the portal.[8] The portal opened, and the path to Azoran was clear. Lyana warned the order leader that they wouldn't have much time before the Legion was made aware of their presence on the ship: when the alarm would be raised, countless Legion forces would attempt to board the ship through this very portal. Lyana vowed to guard the portal from enemy reinforcements until the order leader returned.[9]

The order leader thus boarded the Lightbreaker and killed the surprised Azoran. With him slain, the Legion was dealt a crippling blow that they would not soon recover from.[10]

I thank you for my freedom, <name>.

Unfortunately, the soul harvester has taken much of my strength. I will regain the full extent of my powers shortly.

The Burning Legion has no concept of mercy or remorse. If we wish to defeat such a threat, we must abandon those ideals as well.