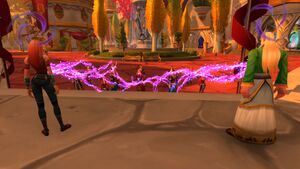 Lyria Skystrider is a blood elf found in the Bazaar of Silvermoon City. She, along with Priest Ennas, is leading a public forum arguing against the policies of the blood elven leadership, specifically their decision to break off their ties to the Alliance and join the Horde. She proclaims that Sylvanas Windrunner is not the same one that they once knew, the orcs are "fair-weather friends", and the magisters are traitors.

After a few minutes, three Silvermoon Magisters in the crowd summon Priest Kath'mar who immediately casts a mind-control spell on Lyria and Ennas, causing their speech to become completely supportive of Lor'themar Theron and the magisters.