This article is about the character M'uru. For information on how to defeat M'uru in World of Warcraft, please see M'uru (tactics).

M'uru was once in Tempest Keep, alongside O'ros, but was overcome by Kael'thas Sunstrider's forces and sent to Silvermoon City. There, the blood elf magisters manipulated his energies and kept him bound, using him as a power source from which the Blood Knight order could siphon the Light.[3] He was eventually drained of his essence and warped into a void god, but was defeated. Prophet Velen used his heart to revitalize the Sunwell.

It was also known as the Dark Naaru.[citation needed]

Right before the invasion of Outland began, Khadgar and Velen reached out to the naaru independently, both seeking aid against the dark forces amassing on Outland. The Army of the Light heard their pleas but the Army's battles with the Legion were costly and ceaseless, so they could not spare soldiers to protect Outland. Instead A'dal, M'uru, and O'ros volunteered to help the people of Outland and arrived with Tempest Keep.[4]

After Kael'thas' forces stormed Tempest Keep, the prince sent M'uru back home to Quel'Thalas believing his people could feed upon. Back in the capital of Silvermoon City, Magister Astalor Bloodsworn and his wizards were not content with this idea, but others weren't so hesitant and started to research on the naaru, resulting in a way to manipulate its energies at their will. The blood elves had experienced a mass loss of faith in the Light following the Scourge invasion of Quel'Thalas, but through M'uru the Light could be seized as a force to control without the need for faith. The Blood Knights were founded with this in mind, and Grand Magister Rommath summoned Lady Liadrin, a former priestess, to induct her as the order's leader. M'uru, now bound beneath the Hall of Blood, was linked with prospective Blood Knights with the aid of the magi. Exposure to M'uru could be testing - the naaru's voice was distorted and reminiscent of shattering glass - and some knights had to overcome physical and emotional pain in order to invoke their powers.[5]

M'uru's exploitation, though seen as pragmatic by the magi and the Blood Knights (who could otherwise not invoke their powers), did not sit well with everyone. Most of the blood elf populace initially looked down upon the Blood Knights for their abuse of M'uru, and the unproven knights were received coldly. The Farstriders in particular, as well as their leader, strongly opposed M'uru's maltreatment and frequently argued against it. The regent lord himself condemned it on moral grounds but held to the belief that victories and accomplishments could justify the Blood Knights' methods, as well as prove their might in the eyes of the Horde. For their part, Thrall and Cairne Bloodhoof both shared this view, condemning the treatment of M'uru but recognizing the knights' strategic value.[6]

Regardless, the knights earned their victories and began to thaw out public opinion, becoming a popular group short years later. Little did they know, however, that events had been set in motion far beyond their control, and that M'uru was more tied to the blood elves' own destiny than any of them knew. 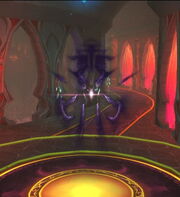 M'uru in the Sunwell Plateau.

M'uru's spark above the Sunwell

M'uru could be found beneath the Blood Knight headquarters in Farstriders' Square. There, blood elf Magisters could be found binding him, and blood elf paladin players were instructed to drain the naaru (using the then-blood elf racial

[Mana Tap]) in order to gain new abilities. M'uru also played a role in several other of their class quests.

After his own defeat in Tempest Keep, Kael'thas Sunstrider attacked Silvermoon and stole M'uru, robbing the Blood Knights of their power source.[7] Now located in Sunwell Plateau, M'uru was sufficiently drained of his energies which caused him to enter a darkened state.

Without M'uru, Lady Liadrin was forced to seek out another source of power for the Blood Knights. She spoke with A'dal in Shattrath City, asking for forgiveness for M'uru's imprisonment, and renounced her loyalties to the blood elves' twisted prince. A'dal revealed that M'uru's imprisonment was foretold by Prophet Velen of the draenei; M'uru willingly accepted his role in the events that unfolded, knowing that it would lead to the elves' redemption and lead them away from the dark fate awaiting Kael'thas and his minions, many of whom were now twisted by the Burning Legion. Liadrin and the Blood Knights pledged to fight alongside the Shattered Sun Offensive in defeating Kael'thas and his demonic master Kil'jaeden.[8]

Following this, the quests involving M'uru were changed. Blood elf paladins would now gather remnants of "holy energy" that lingered around the magisters, rather than the previous requirement of draining M'uru directly.[9] The magisters once found draining M'uru now stood dazed, and Astalor assured players that the knights will remain strong in the face of this betrayal.

M'uru, now used by Kael as something of a guardian, was fought and defeated in the Shrine of the Eclipse. M'uru transformed into the void god Entropius part-way through the encounter. After Kil'jaeden was defeated, Velen and Liadrin arrived on the scene to discuss what the future holds. Liadrin was mournful for the harm the knights had caused M'uru, damning the noble being to a dark fate, but Velen, using M'uru's ancient, unblemished heart, reignited the Sunwell with it.[10]

Thanks to M'uru's essence, the Sunwell's energies are now a mixture of both arcane and holy energy. The Blood Knights now draw their powers directly from the Well, a far more harmonious and less damaging relationship than their previous method of wielding the Light.[11]

After Cataclysm, the quests relating to M'uru were removed, and the blood elf paladin trainers' dialogue no longer speaks of manipulating his energies.