This article is about how to defeat M'uru in World of Warcraft. For character biography, see M'uru.

As of patch 2.4, M'uru is missing from his location beneath the Blood Knight headquarters in Silvermoon's Farstriders' Square, having been captured by Kael'thas and brought to the Sunwell Plateau. Magister Astalor Bloodsworn curses Kael'thas and his felbloods for their treachery, commenting that Lady Liadrin is looking for another source to power the Blood Knights' magic.

These spawn 1 Mage and 2 Berserkers at both sides every 60 seconds. That is 6 Humanoid adds every minute. The Humanoid adds spawn from the corridor behind M'uru, and the ramp/doorway from which you enter, running towards the center.

Void Spawns and Void Sentinel can be snared, Void Spawns can be feared. 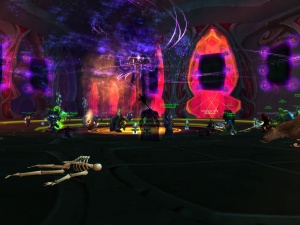 M'uru is a very DPS intensive fight, and as such it requires stretching your healing and tanking as much as possible. This includes having about 4 tanks, 6 healers and 15 DPS. It is highly recommended, if not absolutely necessary, to include a Protection Paladin as one of your tanks to pick up the Void Spawns that spawn.

You must divide your DPS up into a few sub-groups, that are able to each put out substantial amounts of DPS. Generally you will have 2 groups assigned to killing Humanoid adds, as well as a Warlock group assigned to kill Void Sentinels and Void Spawns.

When you are ready to pull M'uru, DPS will mount up in the door way and be ready to run in to their positions and burn M'uru as hard as possible before switching to your respective jobs. Humanoid tanks should be ready to pick up their adds on each side from the start, using only one or two attacks to throw up a

[Faerie Fire] on the boss.

Can also use an Eye of Kilrog to engage and quickly reset him, allowing 30 seconds for the raid to setup and position themselves.

While your raid group runs in and attacks M'uru, you will be in Phase 1. This phase is a combination of a control fight and a DPS race. Each Humanoid group, which will be comprised of one tank, one healer, and three to four DPS, will be in charge of controlling each add entrance (the doorway and the opposite side of the room, where the ramp down to Kil'jaeden is blocked off.) A Mage is also highly recommended on each side, to

[Polymorph] a Berserker or Mage. You will also have a group of AoE, generally Warlocks, to control the Void Sentinels and Spawns. This AoE group is recommended to be comprised of a Protection Warrior or Feral Druid, a Protection Paladin, 3-4 Warlocks and 2 healers (one for each tank). You should also have two raid healers assigned to keep the rest of the raid up.

Each Humanoid Wave consists of two Berserkers and one Mage. When the Humanoid wave enters the room, the tank should pick up all 3 of them while a mage sheeps a Berserker and the tank drags the other two adds slightly away from the sheep so multitarget attacks such as

You should assign a Shadow Priest to DPS M'uru full time and Mass Dispel the Dark Fiends when Darkness comes up inside of it, thereby killing them. Be ready to target ones that resist with a single Dispel or call it out so someone else can Dispel/Purge.

After M'uru has been slain, he transforms into Entropius, a demon-type void god. Most of the adds that were alive during the transition should be dead or almost dead as there is 10 seconds before Entropius engages the raid. Entropius has 1,450,000 health and at this point the fight turns into an all-out DPS race before the raid damage from Negative Energy ramps up substantially and overwhelms your healers. This fight also tests the reflexes of all players in the raid and their ability to move on a seconds notice.

At level 80, like Brutallus before him, M'uru is a trivial encounter due to the fact it was designed to be a gear check and dps race. However, please remember: