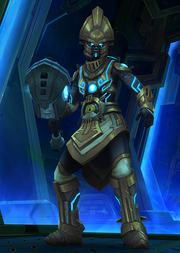 MOTHER (Matron of Tenacity, Herald of Endless Research) is a titanic watcher with special responsibility for the research facility of Uldir, whose main function is to carry out experiments on Old God samples. To fulfill this role, MOTHER was imbued by the titans with an unquenchable thirst for knowledge, especially any kind which might resolve the Old God threat.

Eventually, Uldir itself would become compromised and contaminated through the influence of G'huun, throwing the facility into chaos. Despite the corruption, MOTHER's protocols remained intact, and she aided mortal champions in pushing through Uldir to ultimately vanquish G'huun.

Continuing her work there for a short time after this victory, the watcher later moved to the Chamber of Heart at the behest of Magni Bronzebeard, to apply her skills in healing damage done to Azeroth's world-soul.[1] She can cleanse corrupted items with Titanic Purification.

Thousands of years ago, the facility of Uldir was created by the titan Pantheon in what would become the region of Zandalar. The reasoning behind Uldir's construction lay with the Old God, powerful beings who threatened the very existence of life on Azeroth. To find effective ways of neutralizing the danger, extensive research and experimentation would be carried out at the site, with the Matron of Tenacity, Herald of Endless Research (M.O.T.H.E.R) serving as the titan watcher overseeing this work.

In spite of the titans' highest hopes, however, the work of Uldir would not only prove futile, but disastrous. The experiments conducted by MOTHER and the other operators of the facility accidentally spawned a new Old God altogether, known as G'huun. G'huun's nearly limitless capacity to spread corruption meant that all of Uldir had to be permanently quarantined from the outside world along with MOTHER, while powerful seals held the prison shut. 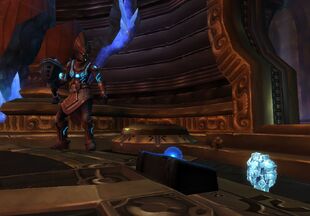 MOTHER, Magni, and Brann in the Chamber of Heart

It wasn't until the Fourth War that Uldir would once again be opened, releasing the threat contained inside. As the seals located around Zandalar were broken, G'huun's corruption coursed through the facility and spread to the outside. Almost all of Uldir's defenses and fail-safes were ultimately overcome by this infection, with only MOTHER remaining active in fighting the spread inside. Indeed, only MOTHER's efforts to slow down G'huun's corruption prevented the total fall of Uldir.[2]

As mortal champions eventually entered the ruins with the intention of ending G'huun, MOTHER determined that the invaders were contaminated, and thus a threat. As such, she engaged the heroes in battle, only pausing when she was bested by their combined might. With this defeat, MOTHER began to aid the mortals in their progress through the titan facility and provided them the information required to permanently destroy the Old God. This was achieved when Uldir's reorigination drive was activated to purge G'huun within the Festering Core, thus ending the immediate threat to Uldir and the rest of the planet.[3]

After G'huun's defeat, MOTHER remained within Uldir and continued her efforts to remove the last of the Old God's influence from the facility. When Magni and Brann Bronzebeard set out to find further ways of healing Azeroth's world-soul, wounded by Sargeras, they ventured to Uldir to make contact with MOTHER herself.[4] Upon doing so, her protocols determined that she should move to the Chamber of Heart to better asses the situation. After dealing with some lingering corruption present in Uldir's titan waygate, the party activated its consoles to transport them to the heart chamber. Despite this success, MOTHER would require some amount of time to analyze the condition of the world-soul and formulate a plan to heal it.[5]

Sometime after N'Zoth was freed, Ebonhorn nearly succumbed to its whispers and would have been killed by MOTHER without Magni's intervention. Seeking to save Ebonhorn, Magni called on heroes to return to the Chamber.[9] Under the advice of Kalecgos, the hero sought out Wrathion in order to save Ebonhorn.[10] Though unable to meet with Wrathion, the hero did acquire a potion of his creation that they used to save Ebonhorn.[11] While recognizing that Wrathion didn't want to be found, Magni knew that knowledge he acquired could be critical in the fight against N'Zoth. Thus knowing that there weren't many places to hide from Azeroth's own speaker, Magni was confident that he would be able to track down the Black Prince.[12]

After MOTHER determined the Engine of Nalak'sha could be used to restore the power of the Forge of Origination, Magni called upon his ally to join him in Pandaria.[13] Having heard that the Mogu'shan Vaults were still abandoned, Magni thought the task would be rather easy only to discover that the mogu and mantid were fighting at the vaults. The dying mogu warrior Tsuo implored the Speaker and Azeroth's champion in seeking out his clan, the Rajani who they discovered to be mogu who answered to Highkeeper Ra.[14][15] After restoring Ra-den's hopes that the Black Empire could be beaten, Ra revealed that the Engine of Nalak'sha could be reached through the Mogu'shan Vaults, allowing the champions to reactivate the structure.[16] Thus, Magni and his ally ventured into the vaults only to be caught off guard by the presence of the mantid. Following the death of Yox'ith, a Manifestation of N'Zoth, Magni was able to have MOTHER use the Engine of Nalak'sha to successfully re-power the Forge of Origination.[16] Magni, Ra, and the Champion then journeyed together to the Chamber of Heart where Magni revealed that they could end the threat of N'Zoth with the Forge of Origination.[17][18]

Soon after, Magni discovered that an anomaly existed within the Halls of Origination and set off to investigate, discovering that N'Zoth was seeking to gain control of the forge.[19][20] In order to help better combat N'Zoth, Wrathion and the champion sought an object of pure corruption, a task that ended with Azeroth's champion acquiring Ashjra'kamas, Shroud of Resolve.[21] After a Horrific Vision was defeated per Wrathion's request, Magni was stunned to hear N'Zoth's within the Chamber of Heart.[22] Subsequently, the Old God attacked the chamber, opening a portal to Ny'alotha and releasing its forces into the facility. MOTHER fought against the Old God's minions alongside the other defenders of the chamber, but once it became clear that N'Zoth was about to overtake the facility, Ra turned to the adventurer and told them to save Azeroth, no matter the cost. The Highkeeper then charged at the portal to Ny'alotha and used a lightning attack to destroy it but was pulled into the realm in the process. According to Magni, the Chamber of Heart and all of Azeroth would've been N'Zoth's for the taking had it not been for Ra's sacrifice.[23]

The subject of this section was removed from World of Warcraft in patch 9.0.1.

Your decontamination of Uldir is acknowledged and appreciated. Recommendation: continue efforts to resolve total planetary annihilation.

Chamber of Heart facility has been rehabilitated. Now functioning within operational parameters.

MOTHER, I have a corrupted item to cleanse.

What else did you discover during your calculations?

Recommendation: Do not approach or engage.