The MOTHER encounter is the second boss in Uldir.

Uldir's titanic watcher was gifted with tenacity and an insatiable desire to discover a "solution" to the Old Gods. Her protocols have remained fully intact, even though many other systems in her facility have collapsed. WARNING: M.O.T.H.E.R. will not accept aid from contaminated subjects. 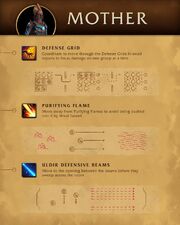 Overview of tactics for the MOTHER fight.

Pass through Defense Grids to reach the final chamber of the Hall of Sanitation. Reaching the third and final chamber cleanses the raid of all corruption, and inflicts MOTHER with Depleted Energy. When MOTHER is first active in any chamber she will begin a countdown to activate Cleansing Purge within that chamber.

Brann Bronzebeard yells: Ye made it! Just gimme a second. I've accessed some sort o' caretaker that I believe operates this facility.
MOTHER yells: I am the Matron of Tenacity, Herald of Endless Research. Designation: M.O.T.H.E.R.

Princess Talanji yells: De doors are locked! Shut down dat machine... before we are reduced to ash!

Brann Bronzebeard yells: What?! No! The blasted doors are sealed! Start breakin' things 'til they open!

Brann Bronzebeard yells: You're a sight for sore eyes. Close as I can figure, this is some sort o' research facility.
MOTHER yells: Designation, Uldir. This research facility was designed to contain and study the entity known as G'huun.

Brann Bronzebeard yells: Well that explains why the blood trolls are lurkin' about, but why would the titans keep an Old God alive?
MOTHER yells: Collection of data is imperative to combating the Old Gods. G'huun's unique biology potentially holds the answer to eliminating their threat.

Princess Talanji yells: And have you found de answer?

Princess Talanji yells: We don't have dat kind of time! G'huun must be stopped now!

Brann Bronzebeard yells: Ach! I dunnae think we have that kind of time. Best get rid of G'huun before this rot gets any worse.
MOTHER yells: In order to destroy the specimen, you must reactivate the vault consoles located throughout this wing.
MOTHER yells: Activating all consoles will grant access to G'huun's vault, where the specimen may be purged by activating the reorigination drive.

Princess Talanji yells: We have a plan. Let's activate de consoles and put an end to G'huun's plague once and for all.

Brann Bronzebeard yells: Sounds like a plan. While we're at it, I'll see what other secrets the titans may have left behind.