World of Warcraft on Mac

From Wowpedia
(Redirected from Mac)
Jump to: navigation, search 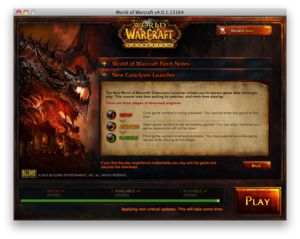 The World of Warcraft launcher for OS X

Mac is an abbreviation for "Macintosh", a brand of computers manufactured by

Apple Inc. Mac OS is short for Macintosh Operating System; Mac OS X is the 10th major revision (hence the Roman numeral X). The current release of Mac OS X is version 10.6 "10.6.7 (10J869)" "Snow Leopard". The OS X client of World of Warcraft is the only client that has a built-in video capture utility.

Recommended system requirements (as of 20-Oct-2010)

Users are sometimes unsure if Macs are able to make use of User Interface Addons. In fact, all UI Addons are built on an XML/Lua scripting system built into WoW and cannot contain native code, so they will run on any platform World of Warcraft runs on —Windows or Mac. Simply place an addon in your World of Warcraft/Interface/AddOns/ folder and restart WoW. (Switching? You can copy that entire folder from a Windows box to get all your addons onto your new Mac. Copy the World of Warcraft/WTF/ folder too and you'll get all your macros, chat window settings, and addon saved data, too.)

Blizzard offers a support forum for Macintosh-specific problems on WoW. The Mac team has proved highly responsive to known issues.

NB: This forum is for players registered through the US servers only, and will not recognize login details for those on other servers. Mac users on the European servers should post Mac queries on Blizzard's European Technical Support forum.

Older Macs came with one-button mice, and the built-in trackpad on Mac notebooks has only one hardware button. Since WoW's UI is designed for a 2+ button mouse, this can lead to some confusion.

Any standard multi-button USB mouse can be used with a Mac. (Macs with Bluetooth can also use any standard BT mouse.) No third-party software is necessary to make use of the secondary button or scroll wheel, or to be able to bind additional buttons to WoW actions. (Third-party software may be useful if you wish to customize extra-mouse-button actions outside of WoW, though.)

Mac OS X UI comes with a default setting that prebinds the keybind `ctrl + mousewheel up/down' under desktop control (it's used to zoom in/out while on desktop - useful when you need to zoom in and out in pictures etc. while outside the game). When in the game pressing `ctrl+mousewheel' gets captured by the OS (instead of the game) and any macro binded to (or meant to handle) `ctrl+mousewheel up/down' will not work. To solve this remove the aforementioned keybind-combo from desktop-control, via Mac Os X settings. Go to:

And that's it. `Ctrl + Mousewheel up/down' will now work as intended.