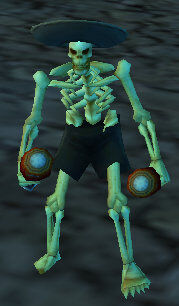 Originally, it could only be summoned during the holiday. This restriction disappeared when it became a battle pet in Patch 5.4.0.

These possessed puppets are given a semblance of life by whimsical spirits of the departed.

In 2009, the Marionette had a duration bug. They could be removed from a player's inventory early if the player used a portal or entered an instance. Furthermore, many of them did not vanish as planned at the end of the holiday. This was "fixed" a week after the holiday when an update deleted any still remaining in player inventory.