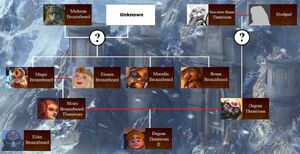 After his death, his and Khardros' sons had statues built to honor both he and Khardros Wildhammer in the Valley of Kings in southern Loch Modan.[1] They keep a constant vigil over the blasted lands to the south, site of the Dark Iron clan betrayal and defeat. Over time, his kingdom would pass into the hands of Magni Bronzebeard.